This week’s Economist has a short report (subscription required) to the effect that:

Poland’s governing Law and Justice party is suing the country’s former president, Lech Walesa, for defamation. Mr Walesa called the current incumbent, Lech Kaczynski [official Polish Presidency site (in English) | his own site (in Polish)], a “blockhead” in a row over a report on alleged criminal activity and Russian influence in the country’s now disbanded military-intelligence service. 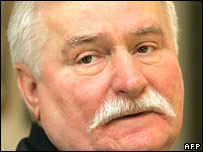 According to the BBC, under Polish law, offending the head of state is a crime that can carry a three-year prison sentence, but Mr Walesa says he is determined to fight the case: ‘ “I stick by what I said,” he told AFP news agency. “We’ll see each other in court.” ‘ Indeed, Reuters via Tiscali (who translate the remark as a reference to “a fool of a president”), reports that Walesa has refused to apologise. [Update (4 March 2007): Ewa says that the Polish media have reported that Walesa has subsequently apologised to the Polish people for his language: “If any of my compatriots felt insulted by this term, then I apologise … I apologise for myself and for the politicians, who sometimes force people to make such remarks … “].

Typical of the terrible twins, this; but can it reasonably be supposed that any successful prosecution could survive a challenge in the European Court of Human Rights on foot of Article 10 of the European Convention of Human Rights? After all, to take only one example from its caselaw, that Court has already ruled (in Oberschlick v Austria (No 2) [1997] ECHR 38 (1 July 1997)) that Article 10 protected the description of JÃ¶rg Haider as a “Trottel” (which the Court daintily translated as an “idiot”, though other sources give much more disparaging translations). “Blockhead” seems a considerably less serious comment by comparison!

Freedom of Expression, Media and Communications