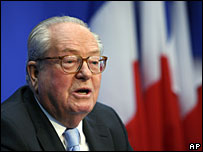 According to various news outlets (BBC | BreakingNews.ie | Irish Independet here and here | Irish Times (sub req’d) | RTE | Telegraph) French far-right leader Jean-Marie Le Pen (left!) has been given a three-month suspended jail term and fined 10,000 euros for playing down the Nazi occupation of France, describing it as “not especially inhumane” in an interview with the far-right magazine Rivarol in January 2005. Moreover, according to the BBC,

Elsewhere in the article he described the 1944 massacre of 86 people in the town of Villeneuve d’Ascq as the actions of a junior officer “mad with rage”, and praised the Gestapo for its role in the incident. The French court ruled that Le Pen had denied a crime against humanity and had been complicit in condoning war crimes.

This is not the first time that Le Pen has faced legal sanctions for making controversial comments about the actions of the Nazis. In 1987 he was fined for describing the Nazi gas chambers as a “detail of history”.

This is unsurprising, but disappointing. The best answer to speech is more speech. Hence, as I have already said on this blog, (in the context of Le Pen’s abortive Dublin visit, condemned here by former Socialist Party TD Joe Higgins and here by UCD Labour Youth), if le pen (freedom of expression) truly is mightier than le sword (the police power of the state), then the best response to Le Pen is to engage with him rather than to prosecute him.

One Reply to “Le Pen is not mightier than le sword”