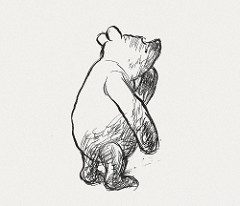 As every fan of a certain bear knows:

Isn’t it funny
How a bear likes honey?
Buzz! Buzz! Buzz!
I wonder why he does?

As if to prove this, the BBC is reporting that the taste of honey was just too tempting for a bear in Macedonia, which repeatedly raided a beekeeper’s hives, and has now been found guilty of theft and criminal damage (see also Daily Mail | Hearld Sun | News.com.au | NPR | NYT | Reuters | RTÉ | The Telegraph | UPI). My favourite headline from the coverage is the Syndey Morning Hearld‘s Guilty as a bear can bee.

Athough most of the commentary focuses upon the obvious comic elements of the tale, there is actually a rather serious point. It was not uncommon in ancient Greece or medieval Europe for animals to be put on trial. So, for example, Jeffrey Kastner Animals on Trial (2001 (4) Cabinet Magazine), discussing Edward Payson Evans The Criminal Prosecution and Capital Punishment of Animals (1906; facsimile reprint, Law Book Exchange, 1998) tells us that

The history of animals in the legal system sketched by Evans is rich and resonant; it provokes profound questions about the evolution of jurisprudential procedure, social and religious organization and notions of culpability and punishment, and funda-mental philosophical questions regarding the place of man within the natural order. In Evans’s narrative, all creatures great and small have their moment before the bench. Grasshoppers and mice; flies and cater-pillars; roosters, weevils, sheep, horses, turtle doves – each takes its turn in the dock, in many cases represented by counsel; each meets a fate in accordance with precedent, delivered by a duly appointed official.

On the other hand, Piers Beirne argues in Society & Animals that

Quite apart from the empirical inadequacies in his account …, Evans’ amusing and superficially uncontentious descriptions of medieval animal trials should not be accepted at face value.

A much more recent, and considerably more balanced, view is provided by chapter three of Darren Oldridge‘s entertainingly eldritch Strange Histories. The Trial of the Pig, the Walking Dead, and Other Matters of Fact from the Medieval and Renaissance Worlds (Routledge, 2006; pbk | hbk) (entitled “They Hang Horses, Don’t They?”).

All are agreed that, of all of God’s creatures put on trial in such circumstances, the most frequent prosecutions were against pigs (indeed, Oldridge’s chapter opens with a conviction of a pig for murder). And this is rather amusingly protrayed in the 1993 movie The Hour of the Pig (imdb) starring Colin Firth in the first of his roles as a rather uptight big-city lawyer, this time in fifteenth century France. Wearying of Paris, he procures for himself an appointment in rural Ponthieu, where he is unwillingly thrust into the defence of a pig accused of murder. It is in fact a rather droll drama, well worth the price of admission, rental or download. And it demonstrates that the Macedonian bear was lucky to be let off with a fine which the state paid. Like Baloo from Disney’s Jungle Book, he’s probably off somewhere chuckling “The Bear Necessities” (YouTube):

Where-ever I wander, where-ever I roam,
I couldn’t be fonder, of my big home.
The bees are buzzin’ in the trees
To make some honey just for me.
When you look under the rocks and plants,
Take a glance at the fancy ants
And maybe try a few!
The bear necessities of life will come to you!
…