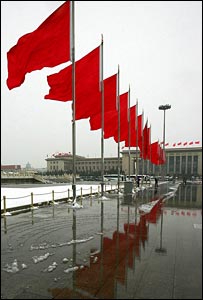 The moral of the story in my previous post about cars being preceded by men carrying red flags is that fear of the new often leads to unnecessary regulation. For this reason, in the context of the internet, we need to be careful about over-reaction and over-regulation. In particular, we now have, in Ireland, a multiplicity of red-flags around the internet, and I wonder whether they are all really necessary.

In November 1999 – arising out of the public debates surrounding the Child Trafficking and Pornography Act, 1998 (also here) and the publication of the Report of the Working Group on the Illegal and Harmful Use of the Internet in July 1998 – the Internet Service Providers Association of Ireland (ISPAI) established the Internet Child Pornography Hotline. It is now part of InHope (the International Association of Internet Hotlines) and of InS@fe, a europe-wide network of internet safety awareness bodies funded by the EU, which organises for example an annual Safer Internet Day (this year, it was 12 February last).

Soon thereafter, the Internet Advisory Board (IAB) was established by the Minister for Justice Equality and Law Reform in February 2000, with a general remit to supervise a system of self regulation by the Irish ISP industry and to pomote awareness of internet safety, particularly with regard to children. It has an independent chairperson and its members include representatives from the ISPAI, the GardaÃ­, children’s bodies, Government departments and public bodies. The IAB and the ISPAI agreed a Code of Practice and Ethics for the Irish internet industry, which the ISPAI published in January 2002 (pdf, analysed here by Tarlach McGonagle). More recently, it has published a series of Get with IT guides for parents to new media, filtering technologies, and social-networking sites. At last September’s launch of the first two (new media, filtering technologies), Minister for Justice, Equality and Law Reform, Brian Lenihan, trailed an announcement of an Office for Internet Safety (OIS). Then, at last month’s launch of the third and final guide (social-networking sites), he announced the appointment of Mr John Laffan as the Director of the OIS. This announcement garnered a lot of coverage (Breaking News on Ireland.com | BreakingNews.ie | Connect | Eircom.net | ENN | IAB press release | Irish Independent | NCC | RTÃ‰ | Security Watch | Silicon Republic) but I haven’t been able to find a website for the OIS yet!

The second-best reaction to the announcement was Tom Raftery’s:

I read in the Irish Independent this morning that the Irish Govt has appointed an â€œInternet Czarâ€? … With any luck they will soon appoint a Book Czar to make books safe for us too.

I thought the government was already keeping us safe from the internet by making sure that most of us canâ€™t get broadband.

One of the first things that the OIS will do is draw up proposals for an Internet Safety Advisory Council (ISAC – again, no website yet) as a successor for the IAB. The ISAC will be as broadly-based as the IAB, and it will support the work of the OIS, but the OIS will take over responsibilities for child internet safety, the hotline, awareness campaigns, and monitoring compliance with the ISP code of practice. It will also, presumably, become the focus for implementing relevant EU initiatives in Ireland. For example, the week after the Minister announced Laffan’s appointment, the EU announced the 2009-2013 phase of its Safer Internet Programme. However, according to the Irish Independent report, although the OIS will not in the first instance have power

power to fine internet service providers, Mr Lenihan said that he would not hesitate to provide the OIS with “legislative teeth” if necessary.

This is meant to be reassuring but I find it anything but. In fact, I find the trend here to be very disquieting. There is a trajectory here from self-regulation via co-regulation towards external regulation – from the ISPAI’s self-regulation by the hotline and the IAB, via co-regulation agreed between the industry and the Department by the ISAC and OIS, towards external regulation threatened to be imposed by the Minister – and once we reach the destination of external regulation, there will be nothing to stop yet more regulation. Of course, some regulation is necessary (especially for children; see webwise.ie and Media Forum); but we must be wary of relying exclusively on it; it can go too far; and we should embrace other strategies, such as those suggested in the Byron review (the subject of my previous post; see also Media Forum).

The Minister’s announcement came during the fortnight of this year’s makeITsecure internet security awareness campaign, an important if worthy and dull initiative. And therein lies its weakness. But it is a weakness endemic in all government safety campaigns (consider this: when was the last time you saw a road safety or drugs awareness advertisment that was other than important, worthy and dull). The campaign ended with a seminar for parents on social networking (on which there is excellent coverage by Cathy on the ever-excellent Rumble Strips here and here; other coverage here and here). The advance publicity for the seminar was a touch sensationalist; the Irish Times (sub req’d) reported on a survey compiled by iReach consultants that found that most parents know little about social networking:

Seven out of 10 young Irish teenagers use social networking sites such as Bebo and MySpace. But most parents have little understanding of the phenomenon including the dangers associated with it, Government- commissioned research released today indicates.

Social networking sites have become a for much misinformed commentary, even hysteria. In a wry and darkly comic observation on this phenomenon, in an insightful post entitled The internet is for suicide, Andres Guadamuz concludes

However, I am waiting for the first politician to call for regulation of social networking sites.

If the trend towards imposed regulation continues, that development cannot be too far away.

4 Reply to “Something must be done – II”