A wonderful video on YouTube seeks to teach the basic principles of copyright law using Disney characters. It’s very entertaining, and the legal analysis is pretty accurate. Perhaps Disney‘s infamously litigious lawyers should have studied it, not for its potential breach of copyright, but for its content, since it seems that Disney might not in fact own some copyrights in their central character, Mickey Mouse.

As Prof David Vaver observed in a fascinating lecture on publishers and copyright (with added links):

Walt Disney may be dead but the corporation he left behind makes no secret of its intention to ensure Mickey’s worldwide legal immortality. To mangle Horace, this is one silly mouse that will produce mountains of law.

For tis the sport to have the enginer Hoist with his owne petar[d]. Joseph Menn, writing in The Los Angeles Times last Friday, reported (with added links):

Disney’s rights to young Mickey Mouse may be wrong

Film credits from the 1920s reveal imprecision in copyright claims that some experts say could invalidate Disney’s long-held copyright. …

Acts of Congress have extended Mickey’s copyright so long that they provoked a Supreme Court challenge, making Mickey the ultimate symbol of intellectual property. …

[The c]opyright questions apply to … Original Mickey, the star of the first synchronized sound cartoon, “Steamboat Willie,” and other early classics, [who] had longer arms, smaller ears and a more pointy nose.

The evolution in Mickey Mouse described here has provoked its own controversy between Darwinian and intelligent design perspectives on evolution; and it may also mean that, whilst Disney (undoubtedly?) holds copyrights in later versions of the mouse, it doesn’t hold one in the earliest version: Menn’s argument is that because the copyright claimed at the end of Steamboat Willie is so ambiguously expressed, it is invalid “under arcane rules of the Copyright Act of 1909“.

Menn’s piece has been picked up a lot online (eg Finance Daily [to which I was directed by Steve; many thanks], AWN, boing boing, filmbuff, techdirt); in classic insider/whistleblower tradition, his main source is indeed a former Disney employee; and the upshot of the revelation may be that Disney does not own a copyright in Steamboat Willie-vintage Mickey Mouse. However, we should not necessarily rejoice too much at this stage. Although Disney had been taking steps to moderate its unfavourable copyright image online, Mike Madison wisely cautions:

Disney has enough ammunition on its side to dissuade all but the most well-financed competitor, or any but the most committed public-interest advocates, from challenging Mickey.

If this is litigated, it will mean that the technical and friendless 1909 Act, long thought interred by the 1976 Act, will be resurrected for at least this purpose. And given its notorious byzantine intricacy, the outcome cannot be guaranteed. Morevover, if the lawyers can’t solve this, then the lobbyists might; either way, this one will no doubt run and run, and it will be every bit as entertaining as one of Disney’s movies! 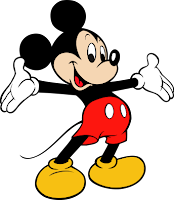 when the copyright in early mouseworks expires, children will take some persuading that this anorexic little fellow [in Steamboat Willie, above] is an acceptable substitute for the cool image (right) into which he has evolved for the 21st century.

4 Reply to “Oh, delicious irony: Disney might not own copyright in Mickey Mouse!?”