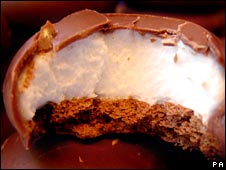 It’s an unjust enrichment case from your M&S. For those who have a taste for this kind of thing, this morning brings momentous news. The teacakes litigation is over! Eventually! After more than 13 years! See Marks and Spencer plc (Appellants) v Her Majesty’s Commissioners of Customs and Excise (Respondents) [2009] UKHL 8 (4 February 2009) (also here). The matter had been referred to the ECJ twice, and had returned to the House of Lords after the second reference (earlier stages are: CA, ECJ, CA, HL here and here, ECJ). Lord Walker of Gestingthorpe concluded his speech as follows:

The Court of Justice’s answers to the third and fifth questions did therefore raise the possibility of further issues having to be decided by the national court. But the Commissioners have, after thirteen years of litigation, decided that they do not wish to pursue these matters. The House can therefore dispose of the matter by allowing the appeal from the order dated 21 October 2003 of the Court of Appeal, and inviting submissions as to costs (if necessary) within fourteen days.

Now, the only question is, what kind of teacake do I want with my morning coffee?!

The UK tax authority, HM Revenue and Customs, has announced that, in the light of a recent House of Lords judgment, it will no longer use the ‘unjust enrichment’ defence to argue against value-added tax claims by businesses. HMRC has arrived at this decision after the Lords ruled on February 4 that Marks and Spencer was entitled to a full refund of VAT paid in respect of teacakes sold over a twenty-year period. …

7 Reply to “This is not just a VAT case”