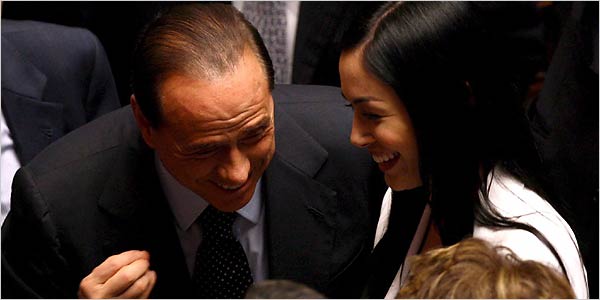 More seriously, though, it seems that 144 people complained to the Broadcasting Complaints Commission about RTÉ’s coverage, 9 about the original report, and 135 about the apology; and Suzy has posted a copy of RTÉs response to the BCC regarding those complaints. In essence, RTÉ’s position is that the original story was not a breach of taste and decency; whilst the apology was not a breach of objectivity. But this is inconsistent. As Clockwork Chartophylax points out

Either the original report was offensive and required an apology, or it was inoffensive and the apology was unnecessary and only made to avoid angering the Taoiseach, which is a clear failure of objectivity and impartiality. RTE management can’t have it both ways.

While we await the BCC’s reply, perhaps Messrs Cowen and Berlusconi might have friends visiting Iowa in the near future? If they do, they might receive an interesting present: a copy of Bill that seeks to prohibit political cartoons (at least in some election contexts) (see Volokh here and here, and Rick Hasen; hat tip: Media Law Prof Blog). Meanwhile, in an echo of my speculation about whether the caricatures constitute seditious libel, a Thai blogger has been sentenced to ten years imprisonment after pleading guilty under Thailand’s ugly lèse-majesté laws – his crime was to have posted anti-monarchy pictures and comments on his blog, and two journalists in the Ivory Coast have been convicted of “offending the head of state” and fined 20 million CFA francs (US$40,500 dollars) each.

In my first post on this issue, I argued that that the caricatures were protected political speech within the remit of Article 10 of the European Convention on Human Rights. Since then, TJ has pointed out to me (off blog) that there is a decision of the European Court of Human Rights directly on point. (I had missed it; or if I had seen it, I had forgotten about it; so, either way, I’m grateful to TJ for bringing it to my attention). In Vereinigung Bildender Künstler v Austria Application no 68354/01, [2007] ECHR 79 (25 January 2007) held that an injunction against the display by the applicant gallery of a collage of various public figures, such as Mother Teresa of Calcutta, the former Austrian cardinal Hermann Groer, the former head of the Austrian Freedom Party (FPÖ) Mr Jörg Haider, and other politicians, in sexual positions, infringed Article 10 of the Convention. The Court emphasised that those who create, perform, distribute or exhibit works of art contribute to the exchange of ideas and opinions which is essential for a democratic society, and it was common ground in the understanding of the domestic courts at all levels that the painting obviously did not aim to reflect or even to suggest reality. Against this background, the Court found that

such portrayal amounted to a caricature of the persons concerned using satirical elements. It notes that satire is a form of artistic expression and social commentary and, by its inherent features of exaggeration and distortion of reality, naturally aims to provoke and agitate. Accordingly, any interference with an artist’s right to such expression must be examined with particular care.

The injunction had been sought by Walter Meischberger, a member of Haider’s party who also appeared in the painting, and the Court considered that this portrayal related not to Meischberger’s private life but rather to his public standing as a politician who therefore had to display a wider tolerance in respect of criticism. Moreover, the injunction was not limited either in time or in space. As a consequence, the Court concluded that, having balanced Meischberger’s personal interests and taking account of the artistic and satirical nature of his portrayal, as well as the impact of the measure at issue on the applicant association, there was an unjustified infringement of Article 10 of the Convention.

In other words, the Cowen caricatures are protected political speech, and there is no use in Cowen crying over spilt milk now.

Finally, some more Cowengate coverage online, since my previous sets of links:

A Articulate (on ABC News) | Arse end of Ireland

B Belfast Telepgraph | Bock the Robber, passim but esp here and here | Brian – censorship is pants

Although doubtless there will be further developments in the story, (update: to some of which I have linked here), this is the last collation of links that I’ll undertake.

6 Reply to “Cowengate: no use crying over spilt milk”