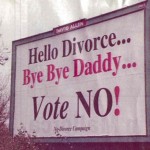 I’ve been putting some slides together for a talk I’m doing tonight at Ignite Dublin #1, and my colleague Dr Neville Cox provided me with the Sunday Independent cartoon which was the subject of the only attempt to prosecute mount a prosecution for blasphemy in Ireland since the adoption of the Constitution (Bunreacht na hÉireann) in 1937. The case is Corway v Independent Newspapers [1999] 4 IR 485; [2000] 1 ILRM 426; [1999] IESC 5 (30 July 1999). In the aftermath of the 1995 referendum which removed the constitutional ban on divorce, the Sunday Independent published an article by Dr Conor Cruise-O’Brien, on the implications of that referendum. The article was accompanied by this cartoon:

During the course of the campaign, those opposed to the amendment ran a powerful advertising campaign built around the slogan “Hello Divorce … Bye Bye Daddy …” (pdf; see the poster at the start of this post), and the cartoon’s caption was clearly a play upon that slogan. In Corway, the applicant wished to commence a prosecution for blasphemous libel against the cartoon and caption, on the grounds that they were calculated to insult the feelings and religious convictions of catholic readers by treating the sacrament of the Eucharist and its administration as objects of scorn and derision. However, under section 8 (also here) of the Defamation Act, 1961, the consent of a High Court judge was necessary to commence the prosecution, but both the High Court and the Supreme Court refused such leave. In the Supreme Court, Barrington J held that the common law crime of blasphemous libel was so uncertain that the constitutional mandate that blasphemy is offence punishable by law could not be given content, and therefore in effect declined to give leave to prosecute because there was no offence which could be prosecuted. Now, however, courtesy of Part 5 of the Defamation Act, 2009, there is indeed a clear offence of blasphemy:

36.—(1) A person who publishes or utters blasphemous matter shall be guilty of an offence and shall be liable upon conviction on indictment to a fine not exceeding €25,000.

(2) For the purposes of this section, a person publishes or utters blasphemous matter if—
(a) he or she publishes or utters matter that is grossly abusive or insulting in relation to matters held sacred by any religion, thereby causing outrage among a substantial number of the adherents of that religion, and
(b) he or she intends, by the publication or utterance of the matter concerned, to cause such outrage.

(3) It shall be a defence to proceedings for an offence under this section for the defendant to prove that a reasonable person would find genuine literary, artistic, political, scientific, or academic value in the matter to which the offence relates.

(4) In this section “religion” does not include an organisation or cult—
(a) the principal object of which is the making of profit, or
(b) that employs oppressive psychological manipulation—
(i) of its followers, or
(ii) for the purpose of gaining new followers.

So, for me, the interesting question is, now that there is once again an offence which could be prosecuted, whether the Corway cartoon would fall foul of section 36 of the 2009 Act? Mr Corway was plainly of the view that the cartoon is grossly abusive or insulting to matters held sacred by the Roman Catholic religion; indeed, he was outraged by it; but there is no evidence that this outrage was shared by a substantial number of his co-religionists. Let us nevertheless assume that outrage. The question would then be whether a reasonable person would think that the cartoon possessed some genuine literary, artistic, political value. Now, I think that it’s making a very important political point, but I may not be “reasonable” in the sense in which section 36(3) uses that phrase – so, what do you think? And, if context matters, even if the original publication does not benefit from the section 36(3) exception, would a reasonable person see the discussion here as political or academic? Let me know in the comments. Thanks.