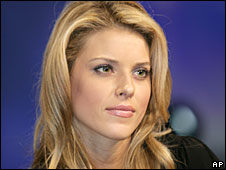 By Meredith R Miller on ContractsProf Blog, a story that needs no further commentary:

You’ll undoubtedly recall that, back in May, we mentioned that Miss California USA (aka Donald Trump) might terminate then-Miss California Carrie Prejean for breach of contract; Prejean was in fact de-crowned, and she sued the pageant organizers for a whole host of things, including discrimination based on her anti-gay marriage stance and violation of her privacy when a representative acknowledged publicly that she had breast implants. The franchise wasted no time with a countersuit and, according to CNN, one of the claims seeks to recover some $5000 the pageant organizers loaned Prejean for the breast implant surgery – pursuant to an oral agreement between the parties.

Some stories, even contracts profs can’t make up. This ugly tale of caution is one of them.

Update (12 November 2009): the case has settled, but controversy continues to follow her.