The Office of the Press Ombudsman ensures that members of the public have access to an independent, quick fair and free mechanism for complaints of breaches of the Code of Practice for Newspapers and Magazines. If Prof John Horgan, the Ombudsman, considers that a complaint is valid, he reeks to resolve the matter by conciliation. If this is not possible, then he will make a decision, which can be appealed to the Press Council of Ireland. Principle 5 of the Code of Practice provides that, on the one hand, the private and family life, home and correspondence of everyone must be respected (5.1), but that, on the other hand, the right to privacy should not prevent publication of matters of public record or in the public interest (5.2); the principle acknowledges that public persons are entitled to privacy (5.4) but it empahsises that

… where a person holds public office, deals with public affairs, follows a public career, or has sought or obtained publicity for his activities, publication of relevant details of his private life and circumstances may be justifiable where the information revealed relates to the validity of the persons conduct, the credibility of his public statements, the value of his publicly expressed views or is otherwise in the public interest. 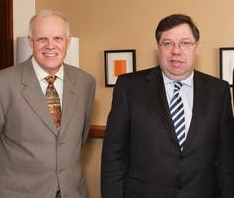 According to this morning’s Sunday Independent, former Taoiseach (Prime Minister) Brian Cowen (pictured far right) is to make a complaint to the Office of the Press Ombudsman that his right to privacy was unjustifiably infringed by newspaper coverage of his time in Stanford last Summer. Of course, when the Sunday Independent sought a comment from Mr Cowen about this development, the traditional “source close to Mr Cowen” last week gave the even more traditional reply: “No comment”. Unsurprisingly, the Sunday Independent considers it “likely” that the Mail‘s publishers “will robustly defend any complaint taken by Mr Cowen on the grounds of public interest”. A decision by the Press Council on this matter is likely to clarify exactly how the Council understands the public interest in the context of politicians. Although Mr Cowen has at present stepped back from front line public life, as a former Taoiseach, he is still a public figure – indeed, he undertook the course in preparation for a possible return to the law or to political life. As a consequence, I would not be sanguine about the former Taoiseach’s chances of success.

Coverage last Summer included the publication of several photographs of a casually dressed Mr Cowen in Stanford (in class, at lunch, and strolling around campus). Principle 5 of the Code specifically covers photographs as follows:

5.5 Taking photographs of individuals in private places without their consent is not acceptable, unless justified by the public interest.

Since Stanford is a private university, it may seem that publication of those photographs is a breach of principle 5.5. But that would be too mechanical an interpretation of a private place. For example, Cowen was regularly photographed as Minister and Taoiseach attending sporting events. Strictly, the stadia in which such events occur are private property, but could not sensibly be described as private places. Similarly, although Stanford’s campus is private property, in my view it cannot sensibly be described as a private place. The same is probably true of the lunch restaurant, but photographs from the classroom are closer to the difficult borderline. But even if the classroom photographs are on the wrong side of the line and constitute an infringement of privacy, if publication of the story is justified as in the public interest, then publication of the classroom photographs would also very likely be justified by the public interest.

Finally, it may be that he intends to complain that some of the Mail‘s reporting was not so much an invasion of privacy as misleading in significant respects. If so, then this is a breach of Principle 1 of the Code, which requires that newspapers strive at all times for truth and accuracy in their reporting (1.1). Crucially, unlike principle 5, there is no public interest justification for a breach of principle 1.

The Ombudsman and Press Council were set up by the print media and recognised by the Minister for Justice under the Defamation Act, 2009 (also here) to provide a means of resolving disputes without recourse to the courts. I’m delighted to see such a prominent figure choosing to deal with the matter in this way, and I look forward to the outcome of the case.

4 Reply to “I know what you did last Summer, Mr Cowen”