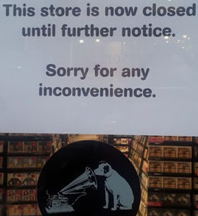 There have been many developments today in the HMV vouchers saga about which I blogged yesterday. I argued that HMV’s vouchers, tokens, gift cards, and the like, were valid, and that National Consumer Agency (the NCA) should have been vocal and active in support of consumers in possession of vouchers which HMV had been refusing to honour. Having monitored the situation yesterday, the NCA sprang into action this morning. They questioned the basis upon which gift vouchers, tokens, gift cards, and the like, were not honoured in HMV’s Irish shops yesterday; and they met with representatives of HMV. However, it was too late, and it was all for naught. HMV’s Irish shops did not open their doors this morning (the notice, right, was on the front door of HMV’s Grafton Street shop this morning). This meant – among other things – that it was not practically possible to redeem vouchers, whatever the legal position as to their validity. Then, it emerged during the day that the Irish operation was going into receivership (and not Examinership, the Irish equivalent of the Administration regime to which the UK operation is subject). This definitively means that vouchers are now effectively worthless, just like the claims of other contractual creditors (including the claim to the proceeds of a charity single). Worse, the Consumers’ Association of Ireland called yesterday for legislation to protect consumers with gift vouchers which had been issued by now-insolvent retailers, but the Government has today ruled that out.

Many of HMV’s UK shops have been displaying notices saying that they were unable to issue refunds or exhanges, or sell or redeem gift cards, or take trade-ins of dvds, games, etc (though in practice, they seem to be honouring their statutory obligations to refund or replace in the case of faulty goods). Passions have been running understandably high over the decision taken on Tuesday by the Administrators of the UK operation not to honour vouchers (which had been for sale up until the previous day). A UK politician and consumer advocate have likened the refusal to honour vouchers to theft. Police were called to a HMV store in Oxford after a “minor dispute” broke out when two customers were told they could not use their gift cards. A grandfather walked out of the HMV shop in Henry Street in Dublin with three computer games after staff refuse to accept a gift voucher presented by his grandson to purchase the games. Good for him, but I wouldn’t recommend this. I can understand that irate customers wanna scream and shout and let it all out, but I think it unfair to make the staff on the ground (whose jobs are in jeopardy) to bear the brunt of consumers’ ire over decisions taken by Administrators. You shouldn’t have to shout, shout, let it all out – which is why prompt action by the NCA (and the OFT in the UK) is much the preferable route to resolve such issues.

HMV and their Administrators justified their refusal to honour the vouchers on the grounds that doing so could breach insolvency laws in both jurisdictions, by treating voucher holders more favourably than other ordinary creditors. However, there are two problems with this explanation. First, since the Irish operation was not in Examinership, let alone receivership or liquidation yesterday, this simply did not apply. Second, whilst this explanation is entirely correct for companies liquidation, and effectively so for companies in receivership (which explains why HMV’s Irish stores, if they were open, could not now honour vouchers), insofar as I can see it is not correct at all for companies in Examinership in Ireland or in Administration in UK (as HMV’s UK operation is). In such cases, the Examiner or Administrator is running the company as a going concern, and can meet trade liabilities as they fall due. It is true that Examiners and Administrators have broad powers to take trade decisions as they see fit; and if they choose not to meet trade liabilities as they fall due, the relevant legislation prevents affected creditors from seeking to wind up the company; but (again, insofar as I can see) that does not alter the validity of the underlying obligations, and it does not affect other remedies which creditors may have to enforce those obligations. As I said yesterday, the only express power in the Irish legislation which allows an Examiner to disclaim a contract applies only with the approval of the court; and there is no equivalent power in the UK legislation allowing an Administrator to disclaim contracts. Of course, if the scheme of arrangement approved by the Court to take the company out of Examinership or Administration cancels contracts such as vouchers, then of course they are no longer enforceable, but the UK Administrators are a very long way from reaching that point yet. Meantime, their refusal to honour vouchers could save them as much as an eye-popping St£100m.

The essential position, therefore, is that, in the Examinership or Administration of a retail chain such as HMV, vouchers, tokens, gift cards, and the like, remain valid and enforceable; and that process provides no justification for a chain to refuse to honour them, as HMV’s Administrators are claiming. Hence, the Administrators of HMV’s UK operation can choose to honour existing vouchers, tokens, gift cards, and the like; and, in my view, they ought to do so. The point bears repeating, loudly. I wanna shout, I wanna scream till the words dry out. So put it in all of the papers, I’m not afraid. They can read all about it, read all about it: a blanket refusal to honour vouchers cannot be justified by the mere fact of an Examinership or Administration. Nevertheless, I fear that the HMV saga will not be the last time that we read all about just such a refusal. Meantime, I hope that HMV emerges successfully from the Irish receivership and the UK Administration, and that, if they do, they will honour existing vouchers, but I’m not too sanguine about that either. All we can do now is wait and see.

The appointment of an administrator in the UK and a receiver in Ireland to the HMV group has not invalidated any HMV Ireland gift vouchers, an accountancy firm has said today. …

ACCA said that it was also wrong of HMV Ireland to refuse to accept vouchers as payment after the administrator was appointed in the UK, but prior to the receiver being appointed in Ireland.

3 Reply to “The HMV vouchers saga just makes me wanna shout, and throw my hands up, in frustration”