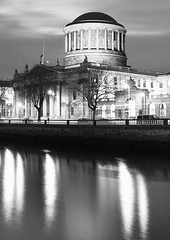 At present, pursuant to the Courts Act, 1991 (also here), the limit for the District Court is €6,384 (formerly £5,000), and this Bill would raise it to €15,000; and the limit for the Circuit Court is €38,092 (formerly £30,000) and this Bill would raise it to €60,000 for personal injury actions and €75,000 for all other civil claims. This is long overdue, as it will mean that cases can now be heard in more appropriate courts; in particular, matters appropriate to the Circuit Court need no longer be commenced in the High Court. In such cases, there will be simplified procedures and reduced costs. I think this is an entirely sensible idea, but I have two comments. First, section 16 of the Courts Act, 1991 (also here) provides a power by which the government may by order vary these limits without recourse to primary legislation; and I hope that this power is used in future to ensure that the District and Circuit Court limits keep pace with inflation. Second, I am not convinced that bifurcating the Circuit Court jurisdiction is a good idea. Although the general jurisdiction is to be €75,000, in his statement on the Bill, the Minister justified the lower threshold for personal injuries cases as a measure “to deal with concerns relating to possible inflation of awards and a consequent effect on insurance costs”. I don’t think that it will have an effect on such awards, but I do think that it will mean that cases which should be dealt with in the Circuit Court will continue unnecessarily to be heard in the High Court.

The other main issue dealt with in this Bill relates to open justice and the in camera rule. As I have had occasion to point out in previous posts on this blog, Article 34.1 of the Constitution requires that, “save in such special and limited cases as may be prescribed by law”, justice shall be administered in public; and section 45 of the Courts (Supplemental Provisions) Act, 1961 (also here) permits justice to be administered otherwise than in public in family law matters (see especially s45(1)(b)-(c)), to protect the identity and privacy of parties and children in such proceedings where there is no good reason that such sensitive matters be published. However, to prevent the perception of undue secrecy in such cases, section 40 of the Civil Liability and Courts Act, 2004 (also here) and associated regulations (the Civil Liability and Courts Act 2004 (Section 40(3)) Regulations 2005 (SI No 337 of 2005)) allow certain people to attend family court sittings to draw up and publish reports, as as those produced by the pilot Family Law Reporting Service and the Child Care Law Reporting Project. The new Bill goes substantially further, in that it allows for “bona fide representatives of the Press” to attend such proceedings. This term is not defined in the Bill, so it will be a matter for a judge in any given case to determine whether a person is such a bona fide journalist. Of course, the Minister may make regulations similar to those under the 2004 Act to set out some criteria to aid in that determination, but he made no comment about this in his statement on the Bill.

However, this right of access is subject to a wide-ranging discretion on the part of the judge to make necessary orders to protect the identity of children or in the interests of the administration of justice. Such orders may include restricting the attendance of journalists during the hearing or particular parts of it, or restricting or prohibiting the publication or broadcasting of evidence given or referred to during the proceedings. Moreover, this overall relaxation of the in camera rule is balanced out by a specific offence of publication or broadcast of in camera matters (which, I take it, replaces the common law rules relating to contempt in such circumstances). This is all very welcome, but I am disappointed that the opportunity was not taken to go further and provide a power permitting the broadcast of (certain) proceedings, in due course.

Even if the Minister could have taken a few more steps, those that he is proposing to take are very welcome in helping to shine appropriate light in an area of the administration of justice which is not as open as it might be.