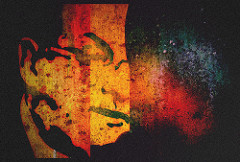 Given his life story, this is unsurprising. In the Autumn of 1989, six months or so after Khomeini had pronounced his infamous fatwa, Rushdie was invited by the Institute of Contemporary Arts in London to deliver the 1990 Herbert Read Memorial Lecture. Writing in Joseph Anton. A Memoir (Jonathan Cape, Random House, London, 2012) p210, Rushdie said

He knew at once that he wanted to write about iconoclasm, to say that in an open society no ideas or beliefs could be ring-fenced or given immunity from challenges of all sorts, philosophical, satirical, profound, superficial, gleeful, irreverent or smart. All liberty required was that the space for discourse itself be protected. Liberty lay in the argument itself, not in the resolution of the argument, in the ability to quarrel, even with the most cherished beliefs of others; a free society was not placid but turbulent. The bazaar of conflicting views was the place where freedom rang.

Moreover, he accords to others the same liberties he exercises himself. On 22 July 1990, the British Board of Film Classification refused a certificate to International Gorillay (imdb | wikipedia | nyt) a Pakistani movie in which a debauched and villainous Rushdie is eventually struck down by thunderbolts from three Korans. As he wrote in Joseph Anton (p256):

It was, for him, an object-lesson in the importance of the ‘better out than in’ free speech argument – that it was better to allow even the most reprehensible speech than to sweep it under the carpet, better to publicly contest and perhaps deride what was loathsome than to give it the glamour of taboo, and that, for the most part, people could be trusted to tell the good from the bad. If International Gorillay had been banned, it would have become the hottest of hot videos and in the parlours of Bradford and Whitechapel young Muslim men would have gathered behind closed curtains to rejoice in the frying of the apostate. Out in the open, subjected to the judgment of the market, it shrivelled like a vampire in sunlight, and was gone.