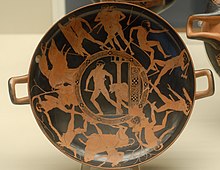 According to Plutarch, in his famous Lives of the Noble Greeks and Romans, Theseus, mythical king of Athens, after many labours and adventures (shown left), including the slaying of the Minotaur, returned to Athens, where his ship was kept in the harbour as a memorial for several centuries. The Athenians repaired and restored it over time, so that eventually every part of it had been replaced. Theseus’ paradox raises the question of whether something that has had all of its parts replaced remains the same thing. The same conundrum arises with the allegorical axe which has had both its head and its handle replaced several times. The Legal Services Regulation Bill has been amended so much during its labyrinthine journey through the Houses of the Oireachtas that I am reminded of these stories.

Many of its proposals were prefigured by the UK’s Legal Services Act 2007. Writing this morning in the Brief (a daily email newsletter from the Times, which will be made available later in the week here), Dame Janet Paraskeva made two points about the Act which resonate in the context of the current Bill. First, she points out the promise of the Act has not always been fulfilled “not … by any shortcoming in the legislation but by a lack of will to make the practical changes on the ground that would remove obstacles to choice.” That is a cautionary tale for the implementation of the Bill, if (and, as now seems likely, when) it is finally enacted.

Second, she argues that the full separation of regulatory and representative functions is one significant piece of unfinished business in the implementation of the 2007 Act:

When regulatory and representative functions are muddled, so are the purposes and impacts of the two activities. … In the operation of the legal services market, and in the delivery of legal services, where the responsibilities and activity of representative and regulatory bodies overlap, there is uncertainty and at times additional, unnecessary burdens that hurt legal businesses and the functioning of the market. … Clarity of separation of roles gives confidence to consumers and certainty to the regulated community. …

This separation of regulatory and representative functions is also a significant element of the Bill. It will establish a Legal Services Regulatory Authority, to “regulate the provision of legal services by legal practitioners” and to “ensure the maintenance and improvement of standards in the provision of such services in the State” (section 12(1) of the Bill as passed by the Dáil (pdf)). For so long as this remains, then the Bill will not have changed out of all recognition, and I don’t think that Theseus’ Paradox will apply. Dame Janet’s column stands as a warning that setting this out in legislation is only the beginning of the story; there are many labours to follow to ensure that its promise is fulfilled.