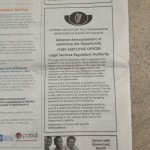 Pictured left is a thumbnail of a photograph of an advertisment that appeared in last Friday’s Irish Times (click through for the full size photograph, where the advertisment is more readable; it’s not online anywhere I can find). It is an advance announcement of the upcoming vacancy for Chief Executive Officer of the Legal Services Regulation Authority (LSRA). I suspect that, when the advertisment was placed, it was expected that the Report and Final stages of the Legal Services Regulation Bill, 2011 would have been taken in the Seanad last Thursday. However, given the large volume of government amendments to the Bill, the Committee stage spilled over until Thursday, and the marathon Report stage continued through Tuesday and yesterday, when the Final stage was taken. After all the squabbles, all the controversy, and all the amendments, all that is required now is the signature of the President. The advertisement says that, once the Bill is enacted, it is intended to proceed quickly to appoint a Chief Executive and get the LSRA up and running. Presumably, the CEO and other vacancies will appear in due course on the Public Jobs website.

The LRSA will consist of 11 members, with expertise in relation to the provision of legal services; legal education and legal training; competition law and policy; the maintenance of standards in professions regulated by a statutory body; dealing with complaints against members of professions regulated by a statutory body; business and commercial matters; the needs of consumers of legal services. A majority will be lay persons (that is, not practising solicitors or barristers), of whom

Given that the members will be nominated by these various bodies, there will be no role for the State Boards website. (There are interesting statistics in the Irish Times (though not yet on the state boards site) on the first year of operation of the latter website: there were than 4,200 applications for 255 vacancies on 63 State boards; of those appointed, 56 per cent were male and 44 per cent were female). And in making its appointments to the LRSA, the Government will have to ensure that no fewer than 4 members are women and no fewer than 4 members are men.

The LRSA will have its work cut out in ensuring systemic reform of the Irish legal system. Other jurisdictions are much further down that road. Indeed, in the UK, as part of plan aimed at Boosting competition to bring down bills for families and firms, the Treasury announced earlier this week that the government

… will launch a consultation by spring 2016 on removing barriers to entry for alternative business models in legal services, and on making legal service regulators independent from their representative bodies. This will create a fairer, more balanced regulatory regime for England and Wales that encourages competition, making it easier for businesses such as supermarkets and estate agents among others, to offer legal services like conveyancing, probate and litigation [para 2.11, p 12 (pdf)].