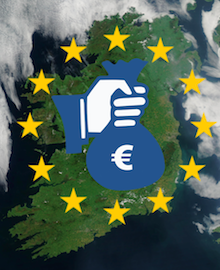 The Times reported last week that the taxpayer has been hit with a €70m bill for overpaid farmers. Under various schemes, farmers are entitled to claim payments via the exchequer from the EU Commission based on the amount of land they own. From 2012, high-resolution aerial photography provided accurate measurements of farms; and it transpired that, between 2008 and 2014, paper maps had overstated the size of some farms, so that some farmers had been overpaid (see here | here | here). After protracted negotiations, the State repaid €68.9million to the EU Commission (see Department of Agriculture press release (pdf)), of which €4 million has been recovered from overpaid farmers. According to The Times, the Minister for Agriculture, Simon Coveney, “expressed his ‘clear preference’ that the repayments should be funded through the exchequer” rather than recovered from the overpaid farmers. A spokesman for the Department told the Times:

Due to the passage of time and the protracted process of opposition to a flat-rate correction with the commission, this cannot be collected from individual farmers.

There may be some factual difficulties in assessing who was overpaid and by how much, but there are no difficulties whatsoever with the legal principles underpinning the State’s claim to recover the overpayments from the overpaid farmers. In Auckland Harbour Board v R [1924] AC 318, 327; [1923] UKPC 92, [1923] NZPC 3 (18 December 1923) [Auckland], Viscount Haldane LC held that

… no money can be taken out of the Consolidated Fund into which the revenues of the State have been paid, excepting under a distinct authorisation from Parliament itself. … Any payment out of the Consolidated Fund made without Parliamentary authority is simply illegal and ultra vires, and may be recovered by the Government if it can, as here, be traced.

The Crown paid £7,500 to the Harbour Board to grant a lease to a third party. Statute authorised the payment only if the lease was entered into. It never was, and the Crown sought to deduct that amount from £25,094 5s 8d due by it to the Harbour Board. The Privy Council held that the Crown was entitled to recover the £7,500 in this way.

This was approved by the House of Lords in Attorney General v Great Southern and Western Railway Company of Ireland [1925] AC 754 (HL) [GSWR]. The House of Lords held that, upon the construction of the UK’s legislative implementation of the Anglo-Irish Treaty (6 December 1921) [the Irish Free State (Agreement) Act, 1922, and the Provisional Government (Transfer of Functions) Order, 1922], the Government of the Irish Free State had succeeded to the rights and liabilities of the British Government under a series of contracts entered into with Irish railway companies in 1917 and 1918. Viscount Cave LC held ([1925] AC 754, 773) that

… no money can be taken out of the Consolidated Fund excepting under a distinct authorization from Parliament itself, and a payment made by the executive Government, however clear the contract, without such an authorization, was held to be ultra vires and recoverable.

This is the first in a series of six posts on (what I will call, after the two leading cases above) the Auckland/GSWR principle. The first element of that principle is the constitutional policy that State payments must be authorised. I will call this the authorisation limb of the Auckland/GSWR principle; I will discuss the common law authorities on this limb in my next post, and I will discuss the constitutional authorities on this limb in my third post in this series. The second element of the principle is that unauthorised State payments can be recovered if they can be identified. I will call this the restitution limb of the Auckland/GSWR principle; it is a claim to restitution of unjust enrichment, because the recipient of the unauthorised payment has been unjustly enriched at the expense of the State; and I will discuss it in my fourth post in this series. This restitution limb raises the question of whether unauthorised State payments must be recovered, and, if so, whether this precludes the operation of ordinary restitution defences; I will discuss these issues in my fifth post in this series. Similar overpayments to Gardaí (Irish police officers) give rise to similar issues considered in an additional footnote post. Moreover, overpayments to Irish farmers and Gardaí are not the only contexts in which these restitution issues have recently been in the news; an interesting example has recently arisen in South Africa; and I will discuss it in my sixth and final post in this series.

The constitutional authorities in the third post include Collins v Minister for Finance [2013] IEHC 530 (26 November 2013); and many of the Australian authorities in that post have much to say on the issues which arise in that case. By way of an addendum, therefore, I will add a further post in which I will consider whether Irish law might draw other conclusions from the Australian constitutional experience.