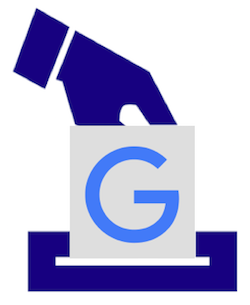 In my earlier post on Vote Zuckerberg No 1? Gatekeepers, intermediaries and Corporate Social Responsibility, I adverted once again to the considerable control that large private companies, such as Facebook and Google, can exert over the flow of information, and noted some stories in which Facebook denied seeking to influence the voting intentions of its customers.

Six searches that show the power of Google

… So let’s look at the power of Google via six searches.

Search 1: How does Google search work?

Search 4: Can Google affect the result of an election
But is there a risk that its market dominance and the sheer power of the Google algorithm could even determine who rules us?

Any search around this topic will throw up articles quoting Dr Robert Epstein, a psychologist at the American Institute for Behavioural Research. He says his research showed that where candidates or parties appeared in search results it could influence elections. “It will shift the opinions of undecided people so dramatically that just being higher in search rankings can win someone an election.” 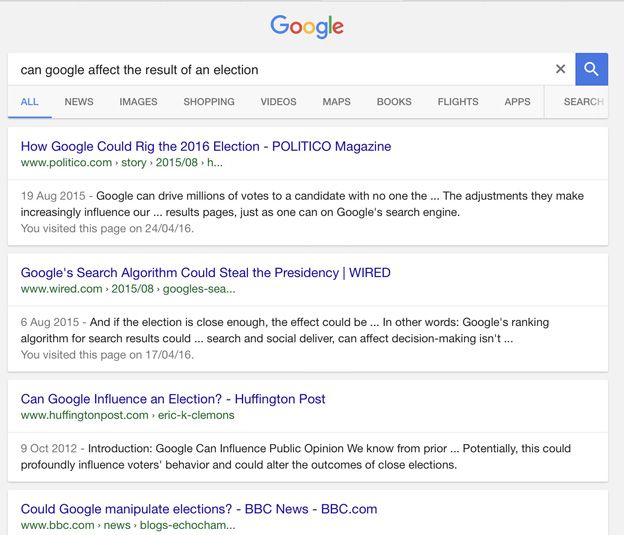 Challenged as to whether Google engineers would really tweak the algorithm to favour one candidate, he says that wouldn’t surprise him, and there was always scope for a rogue employee to do that.

But he says that the worst possibility was that their algorithm could do it. “The computer program is always going to put things into an order and in every election it’s almost certainly going to put one candidate ahead of another.” And that, he says, means elections are being decided by the algorithm.

Google has described Dr Epstein’s research as a “flawed conspiracy theory” and says it has never changed search rankings to manipulate user sentiment.

David Auerbach, a technology columnist at Slate who worked on search at Google for five years, agrees that there is no conscious manipulation going on. But he does see something called emergent bias, where even if Google is producing what it regards as relevant results, “there’s no guarantee that those results are objective because people don’t necessarily think the most objective sources are the most relevant sources.”

Cellan-Jones concluded that the fact that information is delivered to by algorithms, which even Google’s engineers don’t fully understand, made him just a little uneasy. And he explored that unease in The Force of Google, a programme on BBC Radio 4 which was broadcast last Tuesday evening and is currently available here on the BBC iPlayer Radio.

One Reply to “Vote Google No 1? Gatekeepers, intermediaries and Corporate Social Responsibility – a footnote”