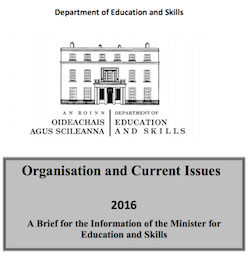 Drafting is under way on a further two Bills.
Universities (Amendment) Bill – The main purpose of this Bill is to allow the Minister for Education and Skills to give a direction to a university requiring it to comply with policy decisions made by the Government relating to the remuneration or numbers of public servants employed in that university. The OPC [the Office of the Parliamentary Counsel to the Government] is well advanced on drafting the text of the Bill and a final draft is awaited.
Retention of Certain Records Bill – …

Moreover, we are told in the Brief – not once, but twice – that a General Scheme for the Higher Education Reform Bill will be published “in Q2 2016”. Here are the two contexts (links and emphasis added):

Higher Education – Policy and Skills
… Higher education policy is focused on implementation of the National Strategy for Higher Education to 2030 [pdf], which was published in January 2011. The Strategy sets out a comprehensive roadmap for reform of the higher education system, with the aim that the system becomes more performance-oriented and more flexible and responsive, while the diversity of mission is retained and enhanced. … Implementation of the Strategy requires a range of governance, funding and structural reforms which need to be enabled through legislation. The current state of play regarding higher education legislation is as follows:

Technological Universities Bill: This Bill was published in December 2015 and was at Report Stage at the time of dissolution of this Dáil in February 2016.

General Scheme for the Higher Education Reform Bill: the current draft provides for University governing body reform and reform of the HEA [Higher Education Authority]. Priority issues for inclusion in the Bill are currently being reviewed, however, the aim is to publish the General Scheme of this Bill in Q2 2016. …

Higher Education Reform Programme
The the National Strategy for Higher Education to 2030 [pdf] sets out a comprehensive roadmap for reform of the higher education system. In order to ensure that the system becomes more performance oriented, more flexible and responsive while its diversity in terms of mission is retained and enhanced, a range of governance, funding and structural reforms are being progressed. … In May 2013, the then Minister set out his response [pdf] to HEA advice on the future confirguration of the higher education system, particularly in relation to the establishment of regional clusters, the implementation of the recommendations of the Initial Teacher Education review and the technological university expressions of interest. The Minister’s policy direction is now being implemented. … [In particular, the application process for criteria for designation as a Technological University] will be placed on a statutory basis through the enactment of the Technological Universities Bill …

[To implement the] the National Strategy for Higher Education to 2030 [pdf] … legislation is required to provide for: …
– Strengthening and reforming the governance structures and accountability of higher education institutions (smaller, less representative, skills based, external majority governing boards);
– Putting in place a new funding, performance and accountability framework for the system that provides statutory underpinning for respective roles, functions and powers of the Minister and a new Higher Education Authority for the governance and regulation of the system; …

There is no further detail in the Brief about the General Scheme for the Higher Education Reform Bill. As to its pre-history, the Minister for Education published a General Scheme of a Universities Amendment Bill in 2012 (pdf), which provided for a very heavy-handed means of ensuring compliance with government guidelines on remuneration, including a very cumbersome procedure for the appointment of a person to exercise the functions of the university in respect of remuneration. This was very controversial at the time: “a great deal more thought will have to go into [it] if the result is not to be chaos”. Nevertheless, the Bill continued to appear in the previous Government’s Legislative Programmes (eg, here for Spring/Summer 2015 (pdf)). It is now mentioned again in the Brief, as part of the Department’s legislative programme [pp16-17 (quoted above); see also pp217-219], and justified as follows:

The amendment will address a significant deficiency in the current legislation which has had and continues to have serious consequences for Government pay and numbers policy.

Work on the publication of the Universities (Amendment) Bill is continuing with assistance from the Attorney General’s office and the aim is for the Bill to be published during the new Dáil Term. [p308].

By way of response to the 2012 Scheme, Senator Seán Barrett, in conjunction with Senator Feargal Quinn and Senator David Norris, introduced the Universities (Development and Innovation) (Amendment) Bill 2015 as a Private Members’ Bill in the Seanad (I assisted Senator Barrett with the drafting of the Bill, and it is the subject of four posts by me on this blog: I, II, III, IV). In the Seanad Debate on the Bill, the Minister for Education said that “a broader higher education reform Bill, the general scheme of which is currently being drafted, will … contain the amendments to the Universities Act necessary to implement governance and accountability reforms”. So far as I can see, this is the public first mention of the General Scheme for the Higher Education Reform Bill. And it was mentioned as a C item in the previous Government’s Legislative Programme for Autumn/Winter 2015.

It is intriguing that the the Department’s legislative programme set out in the Brief [pp16-17 (quoted above); see also pp217-219] makes no mention of this Scheme; but it does refer to a Universities (Amendment) Bill, as well as to a Higher Education Authority Bill. There are many permutation here. Either the Higher Education Reform Bill is a third bill which should have been mentioned alongside the other two, or it has subsumed one or both of them. On the one hand, very little detail is given about Higher Education Authority Bill [pp17, 219]. On the other hand, explanations of the General Scheme for the Higher Education Reform Bill [pp69, 73] to the effect that the Scheme provides for for University governing body reform and reform of the HEA suggests some rationalisation. The legislative priorities [p73 (quoted above)] don’t shed any light on the this issue.

Whether there will ultimately be one Bill, or two, or even three, persisting with the approach taken in the General Scheme of a Universities Amendment Bill in 2012 would be unwise. In particular, the 2012 Scheme does not properly distinguish between funding from the Oireachtas to the universities via the HEA pursuant to section 12 of the Higher Education Authority Act, 1971 [let’s call it “section 12 funding”], and funding from other sources. Whilst it is appropriate that the former would carry with it a greater level of government engagement, the latter should benefit from the principle of institutional autonomy in section 14 of the Universities Act, 1997. Section 6 of Senator Barrett’s Bill proposed a different approach: it provided a simplified means by which the Minister could give a direction to universities relating to section 12 funding; and it accepted continued Oireachtas oversight over all of the universities’ accounts; but it granted a rather freer hand to the universities in the disbursement of funding from sources other than section 12 funding. This was the issue of principle at the heart of Senator Barrett’s Bill. It would have rendered unto Caesar that which is Caesar’s, in that it would have accepted the principle of Oireachtas control over Oireachtas money (that is, over “section 12 funding”) and Oireachtas oversight over universities’ accounts, but it would not have afforded similar Oireachtas control over money from sources other than “section 12 funding”.

We are also told that a big package of amendments relating to Qualifications and Quality Assurance is on the way:

Qualifications and Quality Assurance (Amendment) Bill
QQI was established in November 2012 under the Qualifications and Quality Assurance (Education and Training) Act 2012. In January 2015, following the High Court ruling [in National Employment Development Training Centre Ltd v Minister for Justice & Equality [2015] IEHC 140 (13 January 2015)] …, a comprehensive review by QQI of its powers under the 2012 Act was conducted. … Ministerial approval to initiate a new Bill to amend [that Act] was received in November 2015. … A Memorandum will be prepared seeking Government approval to proceed with the preparation of the General Scheme of this Bill. This will be submitted for Ministerial approval in the first instance. [pp63-64]