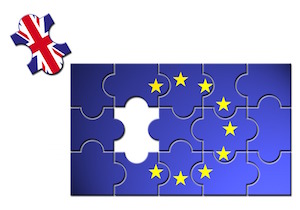 I still can’t believe the news about Brexit, and I suspect the same is true of many on both sides of the issue. Since then, there has been much talk about Article 50, and much speculation about the possibility of a second referendum to undo the first. In this brief post, I want to put those two issues together. First, Article 50 is an article of the Treaty on European Union inserted by the Treaty of Lisbon. It is the mechanism by which a Member State may leave the EU. It provides in full as follows (with added links):

Let us assume that, following the Brexit referendum vote and pursuant to the UK’s own constitutional requirements, the procedure in this Article is triggered, and agreement is reached between the UK and EU on the terms of a withdrawal agreement.

[Revised and updated]: An excellent guide to the process is provided in the House of Lords’ European Committee Paper on The process of withdrawing from the European Union (11th Report of Session 2015–16; HL Paper 138; html | pdf); a clear practical summary of the process is helpfully set out by the BBC EU spells out procedure for UK to leave; and Duncan French provides very clear analysis of the legal implications of the UK’s renegotiation and withdrawal. As to the necessary UK Parliamentary procedures, see Nick Barber, Tom Hickman & Jeff King on Pulling the Article 50 ‘Trigger’: Parliament’s Indispensable Role and the replies by Carl Gardner’s Article 50, and UK constitutional law and Kenneth Armstrong Push Me, Pull You: Whose Hand on the Article 50 Trigger?.

My question is, could the UK government put that withdrawal agreement to a further referendum, asking in effect if the UK should ratify it and bring it into force? And if it does, is there any route by which a vote to reject the withdrawal agreement and to remain in the EU could be given effect? The terms of withdrawal would be clear, and the choice facing the voters would be more realistic and more focussed than in last week’s referendum. I will leave the politics of this to others, but I will raise here two of the (doubtless many, many) legal issues which arise.

The first issue is whether this is possible from the perspective of the UK’s constitutional requirements. I don’t see why not, but I welcome comments as to whether this is so. As with the current referendum, by virtue of the doctrine of Parliament Sovereignty, it would only be a pre-legislative and non-binding advisory referendum, but Parliament would be very slow indeed to decline to act accordingly.

The second issue is whether this is possible from the perspective of the Article 50 TEU (above). Here, things are a little more opaque. On a literal interpretation of the Article, it does not seem to provide for the suspension of the withdrawal process, but the CJEU has never tied itself to an exclusively literal approach to the European Treaties. Instead, as former CJEU Advocate General and retired Irish Supreme Court judge, Nial Fennelly, explains:

The characteristic element in the Court’s interpretative method is … [the] “teleological” approach, … that it is necessary to consider “the spirit, the general scheme and the wording,” supplemented later by consideration of “the system and objectives of the Treaty.” In more recent years, the idea of “context” has been added, and the prevailing wording, varying minimally from case to case, has been that it is necessary when interpreting a provision of Community law to consider “not only its wording, but also the context in which it occurs and the objects of the rules of which it is a part.”

More complications arise under the second alternative, by which the withdrawal seems automatic after two years “unless the European Council, in agreement with the Member State concerned, unanimously decides to extend this period”. So, the question is: could some form of words be agreed “to extend this period” indefinitely? And even if so, would the CJEU uphold it? Again, I would not wish to predict whether it would, and it might again be asked for an advisory opinion on the issue.

I am even less clear on this EU issue than I am on the UK constitutional issue above, and I equally welcome comments as to whether this is legally possible. I leave the question of whether this is likely to the politicians.

Let us therefore assume that the UK would negotiate a withdrawal agreement pursuant to Article 50, and put it to the people in a referendum. Let us further assume that the result in that referendum is in favour of remain, such that the withdrawal agreement is rejected, and Parliament therefore declines to ratify that agreement and bring into force. In such circumstances, my question is this: could the UK rely on an agreement with the other Member States – via the European Council – either that the Article 50 process would be suspended or abandoned, or that any automatic withdrawal would be postponed until a withdrawal agreement enters into force? In either case, the result would be that the Article 50 process would have provided route, via a second Brexit referendum, to ensuring that the UK would not have left the EU. Time may well tell. Meanwhile, answers on a postcard …