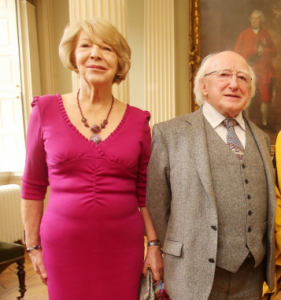 I came across the above quote in a newspaper article over the weekend. It was about Bill Clinton’s role in a Hillary Clinton White House. But it reminded me of a war of words which broke out a little closer to home a few months ago, concerning remarks made by Sabina Higgins, wife of President Michael D Higgins, to the Nursing and Midwifery Board of Ireland in Trinity College Dublin. Her ex tempore comments, about abortion, were controversial (eg here; here; here; and here) and she was immediately criticised – for the words she chose, for the point she made, and for the fact that she made it.

It is upon this last strand of criticism that I want to focus here. The headline to an article by David Quinn in the Irish Independent at the time captures the essence of this objection: The presidency must stay above the fray – otherwise you rob it of prestige. The controversy over Mrs Higgins’s remarks poses the question whether the spouse of the President should be subject to similar bounds. At the time, there was a great deal of public support for this position. In an online poll for the Claire Byrne Live television show, 46% of respondents felt that Mrs Higgins should not have said anything about abortion, while 42% thought it was appropriate, and 12% didn’t know.

As to whether the spouse of the President should be subject to bounds similar to those pertaining to the office of the President, I have, in the past, on this blog here and here) discussed controversies which have arisen when the President has made remarks which seem to push the bounds of his office (Laura Cahillane has recently published an excellent post on the issue of the President, Public Statements and Political Controversies). It has been argued there too that the presidency must stay above the fray, so as not to rob it of prestige – in particular, it is argued that it is reasonable to expect that the President would refrain from criticising in public a government decision or policy. On the other hand, it has been argued that the Constitution does not confine the President to discursive platitude – in particular, it is argued that it is well within the presidential ambit to articulate broad matters of national concern. Given that the divisive nature of the debate around abortion, it is plainly a broad matter of national concern. And it is a nice question whether Mrs Higgins’s comments went further and amount to public criticism of government inaction. In my view, however, there must be a very strong reason to restrict freedom of expression, whether it is the rights of a person (such as the President’s spouse) to comment on a political matter, or the right of a politician (such as the President) to comment on a personal plight. As the headline to an article by Liz O’Donnell in the Irish Independent puts it: we didn’t elect the President to keep his mouth shut on big issues. On that standard, there is nothing to prevent Mrs Higgins from saying what she said, or for contributing to other public issues. Her right to do so is stated in famous terms by John Stuart Mill, whose book On Liberty (1829) is famous for its argument in favour of freedom of speech:

First, if any opinion is compelled to silence, that opinion may, for aught we can certainly know, be true. To deny this is to assume our own infallibility.

Secondly, though the silenced opinion be an error, it may, and very commonly does, contain a portion of truth; and since the general or prevailing opinion on any subject is rarely or never the whole truth, it is only by the collision of adverse opinions that the remainder of the truth has any chance of being supplied.

Thirdly, even if the received opinion be not only true, but the whole truth; unless it is suffered to be, and actually is, vigorously and earnestly contested, it will, by most of those who receive it, be held in the manner of a prejudice, with little comprehension or feeling of its rational grounds.

And not only this, but, fourthly, the meaning of the doctrine itself will be in danger of being lost, or enfeebled, and deprived of its vital effect on the character and conduct: the dogma becoming a mere formal profession, inefficacious for good, but cumbering the ground, and preventing the growth of any real and heartfelt conviction, from reason or personal experience.

In essence, even if we disagree with what Mrs Higgins said, we cannot infallibly know that she is wrong; and even if she is, her stating her it will force those who are right into better defences of their position, which is to the benefit of all.

You are, because of the position your husband has assumed, expected and officially required to be PERFECT!

This is probably the source for the newspaper quote which I have used as the title for this post. And it is “pure applesauce” (as the late Scalia J once said of “interpretive jiggery-pokery” from which he dissented). There is no such principle; and there is no principled constitutional basis for such a principle. In the context of Mrs Higgins, it is a personal criticism of her and her words, dressed up as a faux-principled critique of her role as the President’s wife.

Worse, even if there were to be such a principle that the President’s wife observe a self-denying ordinance, there would be consequential questions as to how far it can reach. Would it apply to other family members? Would it apply if the spouse or family member is a politician? How long would it last after the spouse’s spouse is no longer President? For example, President McAleese’s husband, Martin McAleese, was appointed a Senator whilst she was in office. President Higgins’ daughter, Alice Mary Higgins, has just been elected a Senator on the NUI panel. President Robinson has gone on to an international career; and President Childers’ daughter, Nessa Childers is an MEP. And, in the context of the article from the title to the post is taken, what can Hillary do with Bill?

To my mind, there is no workable basis on which a member of the President’s family is to be confined to speech above the political fray. Mill, immediately after the extract above, (in words that define exactly the impact of Mrs Higgins’s words and the reactions of her critics) went on to say:

… it is fit to take some notice of those who say, that the free expression of all opinions should be permitted, on condition that the manner be temperate, and do not pass the bounds of fair discussion. Much might be said on the impossibility of fixing where these supposed bounds are to be placed; for if the test be offence to those whose opinion is attacked, I think experience testifies that this offence is given whenever the attack is telling and powerful, and that every opponent who pushes them hard, and whom they find it difficult to answer, appears to them, if he shows any strong feeling on the subject, an intemperate opponent.

Offence is a weasel objection, easy to claim, hard to refute, and always in the eye of the offended. Worse, it is a function of hypocrisy: critics who claim offence defend their right to assert their offence even as they would deny freedom of speech to those whom they criticise. To return to Mill:

He cannot rightfully be compelled to do or forbear because it will be better for him to do so, because it will make him happier, because, in the opinions of others, to do so would be wise, or even right. These are good reasons for remonstrating with him, or reasoning with him, or persuading him, or entreating him, but not for compelling him, or visiting him with any evil in case he do otherwise.

In Mrs Higgins’s case, what she says is her choice, not that of her critics.