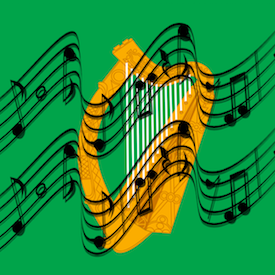 This is a call for help. I would like suggestions as to what should, and should not, be in a National Anthem Bill – either in the comments below, via the contact form on this blog, by email, on a postcard, or even by means of carrier pigeon (or messenger raven) …

In four recent posts (here, here, here, and here) I’ve been looking at various issues around the national anthem. The context has been Senator Mark Daly‘s National Anthem (Protection of Copyright and Related Rights) (Amendment) (No 2) Bill 2016, but the analysis has ranged much more widely than that. And it has become clear to me that there are lots of gaps in the story of our national anthem. Some of those gaps could be filled by legislation, and so I am trying to work out what that legislation might provide.

I am conscious that, to a man with a hammer, every problem looks like a nail; and to a lawyer, every problem looks like it can be solved with legislation. A hammer isn’t always the solution to DIY problems, and legislation isn’t always the solution to social problems. So, I want to identify not only the issues around the anthem that could admit of a legislative solution, but also the issues where legislation would be unsuitable or ill-advised. Hence my call for suggestions as to what should, and should not, be in a National Anthem Bill.

I agree with Senator Daly that the anthem should be treated with respect and dignity, and that legislation could protect it from inappropriate commercialization, but I do not think that copyright is a suitable means to this end. In a previous post, I commented that if legislation is to be used for this purpose, then it should set out exactly what is protected, what that protection means, and what the standards of protection are. Hence, rather than just criticizing, I would like to be able to offer an alternative solution that respects the national anthem, and protects it from inappropriate commercialization, but without going too far.

Having regard other countries provide in legislation about their national anthems, I think the first thing that an Irish Bill could do is provide a clear definition of the national anthem. You’d think that the answer to the question “what is the national anthem?” would be a simple one. You’d be wrong. It’s actually quite complicated. The chorus of “The Solider’s Song” (composed 1907; words in English by Peadar Kearney (1883-1942); music by Patrick Heeney (1881-1911)) was formally adopted to very little fanfare as the national anthem in 1926. By the end of the 1930s, the chorus of the Irish language translation “Amhrán na bhFiann” (words by Liam Ó Rinn (1886-1943), set to the Heeney’s music) had completely taken over as the national anthem in popular usage, though it has never been formally adopted by the State. Although the flag is provided for in Article 7 of the Constitution, there is no constitutional, or even statutory, definition of the national anthem. We have no clear official statement that the anthem in common practice is indeed our national anthem. This is an unnecessarily messy status for the anthem, and the first significant section of a National Anthem Bill should regularise this position. Canada provides an excellent example here. Their National Anthem Act, 1985 is a short Act that provides simply that the music, and French and English words, of the song “O Canada”, as set out in a schedule to the Act, “are designated as the national anthem of Canada”. In Ireland, a National Anthem Bill could do the same thing, for Heeney’s music, Ó Rinn’s words in Irish, and Kearney’s words in English.

(For my own part, I would not make any changes to the music or words of the anthem; but, if it is thought that some changes should be made, then they could be incorporated into the versions in the Schedule. In my view, it would be sufficient if the the sheet music (pdf) currently available on the Taoiseach’s website (with the dates for Liam Ó Rinn corrected to read “1886-1943”) were to be reproduced in the Schedule).

Once the national anthem is placed on a formal statutory footing, the Bill could also contain a general statement it should be treated and performed with respect and dignity. This would meet one of Senator Daly’s concerns. However, this section should not be overly prescriptive. Indeed, in my view, this kind of section should be no more than a general encouragement. For example, in India, the Ministry of Home Affairs provides (pdf) that it is “left to the good sense of the people” not to indulge in indiscriminate performances of the Anthem. Again, in the US, directions about saluting and standing to attention are provided in legislation (36 US Code § 301). But these directions are guidelines, stated in precatory or exhortatory – rather than prescriptive or binding – terms (“should … stand at attention”, rather than “shall” do so). Moreover, to emphasise the exhortatory non-prescriptive nature of any such provision, the lead of section 42(11) of the Irish Human Rights and Equality Commission Act 2014 could be followed, to prescribe that the section does not give rise to legal obligations.

Senator Daly’s key concern is to protect the national anthem from inappropriate uses. However, his Bill is very terse. It simply asserts copyright for the State, and effectively leaves it in practice to an official in a government department to make judgment calls as to what would be appropriate and what would not, and thus to give copyright permission to appropriate uses and refuse copyright permission for inappropriate uses, without providing guidance as to what constitutes appropriate or inappropriate uses. This is not what copyright is for. Moreover, a Bill should provide far greater precision and much clearer guidance on such crucial matters. Senator Daly’s core example of an inappropriate use of the anthem is a commercial advertisement. For my own part, I have no problem with the advertisement in question. But if adddressing the use of the anthem in commercial advertising is the issue with which Senator Daly wishes to grapple, then that should be addressed directly and explicitly in its own terms, and not indirectly and obliquely by means of copyright. Indeed, it would not be impossible to draft a provision addressing the use of the anthem in commercial advertising. For example, section 41 of the Broadcasting Act 2009 (also here) already provides restrictions upon the broadcast of religious and political advertising. (Indeed, if that lead is followed, then any restrictions the use of the anthem in commercial advertising is likely to survive constitutional challenge for same reasons that reasons restrictions upon religious and political advertising survived challenges in Murphy v Independent Radio and Television Commission [1999] 1 IR 12, [1998] 2 ILRM 360 (28 May 1998) (doc | pdf); Colgan v IRTC [2000] 2 IR 490, [1999] 1 ILRM 22, [1998] IEHC 117 (20 July 1998); Murphy v Ireland 44179/98 (2003) 38 EHRR 212, [2003] ECHR 352 (10 July 2003); Animal Defenders International v UK 48876/08 (2013) 57 EHRR 21, [2013] ECHR 362 (22 April 2013)).

Senator Daly presents the use of the anthem in commercial advertising as the core example of commercial misuse of the anthem, but, in his radio interviews, he plainly considers that other commercial misuses should also be addressed. A National Anthem Bill could therefore seek to draw the line between appropriate non-commercial and inappropriate commercial uses of anthem. If so, the issue should not be left entirely to the judgment call of an official in a government department; the Bill should provide as much precision and guidance as possible on such a crucial matter. These are not necessarily easy lines to draw, but the alternative is to cast the net too widely, which is what Senator Daly’s current draft does. It seems to me that, on the commercial side of the line are commercial recordings, broadcasts, and performances of the anthem, and that, on the non-commercial side of the line are charitable, educational, personal, private or religious uses of the anthem. It also seems to me that distinction could form the foundation of the statutory line between appropriate non-commercial and inappropriate commercial uses of anthem.

Whether it comes to commercial advertising or other commercial usages, once the lines are drawn and the necessary definitions provided in the legislation, I wouldn’t ban them outright; instead, I’d provide that such matters would require the consent of the Minister – permission to use the anthem has in the past been a matter for the Department of Finance, though some thought might be given to whether it should in the future be a matter for the Minister for Arts, Heritage, Regional, Rural and Gaeltacht Affairs. It may be that the former practice in the Department of Finance could add to the definitions emerging here, so the Bill could provide that the relevant Minister could make secondary legislation giving further content to the commercial advertising or other commercial usages that would require the Minister’s consent.

Finally, whilst most uses of the anthem would fall on the non-commercial and thus permitted side of the line, in the case of those advertising or commercial uses that would require Ministerial consent, I think some thought might be given to establishing scales of charges to be levied in consideration of any consent granted by the Minister. This would be a departure from the former practice that performance fees were not charged or collected for permitted uses of the anthem; but, on the criteria emerging here, the vast vast majority of usages would not need the consent of the Minister, and therefore would not be subject to the possibility of such charges. It is only in respect of advertising, and commercial public performances, that consent would be necessary. Even then, where consent is granted, a charge need not be levied. Furthermore, if a charge is indeed levied, it doesn’t have to disappear into the maw of the Department of Finance. For example, in 1929, the author JM Barrie had donated his copyright in his play “Peter Pan” to the Hospital for Sick Children, Great Ormond Street, London. When that lapsed after his death, copyright legislation was amended to provide that the hospital would still be entitled to a royalty payment in respect of the public performance, commercial publication or communication to the public of the play (indeed, a National Anthem Bill could build upon this formula to define the commercial uses that would need the consent of the Minister, subject to a charge). By analogy, any charges paid for use of the national anthem could also go to good causes, and one way to do so in the Bill would be to provide that such charges should be disbursed as if it were National Lottery funding.

So, in sum, what should, and should not, be in a National Anthem Bill?