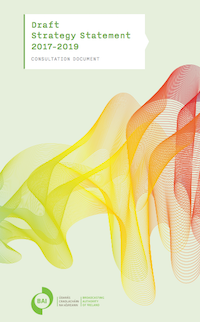 Hot on the heels of the announcement of a review of the Defamation Act 2009 (also here) by the Department of Justice comes news of a consultation by the Broadcasting Authority of Ireland on its Strategy Statement for 2017–2019 (download pdf).

Sections 66(2)(i) and 137(2)(i) of the Broadcasting Act, 2009 (also here) require the BAI to have regard to “the desirability of allowing any person, or group of persons, to have control of, or substantial interests in, an undue amount of the communications media” in a specified area.

Against this background, and in the context of the recent debate about the constitutional issues facing the regulation of media ownership in Ireland, (especially where such regulation is directed to the promotion of pluralism and diversity), the BAI’s proposed Mission Statement provides that it is the aim of the BAI [emphasis added] –

I To regulate, foster and support broadcasting in the public interest;
II To promote a plurality of voices, viewpoints, outlets and sources in Irish media;
III To foster diverse and culturally relevant quality content for Irish audiences.

Moreover, one of the five proposed strategic themes is the promotion of diversity and plurality, with the following strategic objectives:

1 [To] Facilitate a mix of voices, opinions and sources of news and current affairs in audio-visual media which enhances democratic debate and active citizenship in Ireland.
2 [To] Increase the production and availability of culturally relevant audiovisual content for Irish audiences.
3 [To] Foster a media landscape that is representative of, and accessible to, the diversity of Irish society.

Reporting on the launch of the consultation, Laura Slattery in the Irish Times writes (with added links):

BAI chief executive Michael O’Keeffe said the authority also planned to re-examine the media ownership and control policy [pdf] in place since 2012. … The broadcasting regulator could yet become involved in the proposed Independent News & Media takeover of Celtic Media Group’s newspapers – if it is nominated to consider the plurality implications of the acquisition by Minister for Communications Denis Naughten, despite the fact that the deal involves two print groups.

A survey of industry participants [which will be available here in due course] indicated the BAI “is not particularly visible in leading the debate on plurality”, said Karen Hall, account director at research firm Ipsos MRBI.

Given that the recent Report on the Concentration of Media Ownership in Ireland (download pdfs here, here and here; blogged here) calls on the Irish government to tackle Denis O’Brien’s media control, it is interesting to note the BAI’s 2012 position on this issue in the context of their Ownership and Control Policy:

At its meeting on 23rd July 2012 the Authority determined that Mr. O’Brien does not control IN&M. Rather he has a substantial interest in the Company, as that term is defined in the Policy. In this regard, the Authority was not obliged to review Mr. O’Brien’s interests in the context of an undue amount of communications media.

Of course, this is only one question amongst many important issues in the consultation. Responses are requested by 12 noon on Thursday, 1st December 2016, by by email or by post to Draft Strategy, Broadcasting Authority of Ireland, 2–5 Warrington Place, Dublin 2.