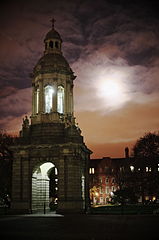 Dublin, Tuesday February 21st 2017 – Trinity College Dublin regrets that Israel’s ambassador to Ireland, HE Ze’ev Boker, was unable to take part in a question and answer session on Monday evening after protesters from inside and outside the university threatened to disrupt the event. The university regards what happened as an unacceptable attack on free speech.

Ambassador Boker had been due to address a student society on Monday but the event was cancelled before he arrived at the proposed venue amid security concerns. University officials had unsuccessfully tried to get the protesters to leave an area surrounding the door to a lecture theatre. The ambassador has been a regular and welcome visitor to Trinity since his appointment. He had dinner in the university earlier in the same evening and attended another event in Trinity last week.

Trinity’s Provost Patrick Prendergast criticised the protesters for preventing a guest from expressing his opinions. “This was most unfortunate and represents the antithesis of what Trinity stands for. Universities should be able to facilitate the exchange of ideas. The protesters have violated that fundamental belief. Trinity will remain a home for debate and we will do everything possible to make sure that efforts to suppress the free exchange of ideas do not succeed. I look forward to welcoming Ambassador Boker back to Trinity to speak again in the near future.

Students for Justice in Palestine (SJP) have been fined €150 following their protest of a talk, organised by the Society for International Affairs (SoFIA), given by the Israeli ambassador to Ireland. …

One Reply to “Oh no, not again – another heckler’s veto in Trinity”