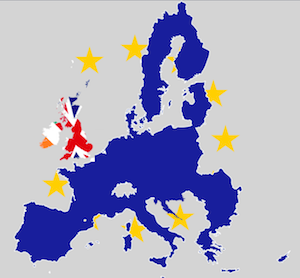 The Irish Council for Civil Liberties (ICCL) seminar on the Constitutional and Human Rights Implications of BREXIT, North and South this evening at 5:00pm in the Distillery Building, Church Street, Dublin 7 (map via here). It’s something I’ve blogged about here, here, here and here. Since then, the UK Supreme Court has handed down its judgment in R (on the application of Miller) v Secretary of State for Exiting the European Union [2017] UKSC 5 (24 January 2017). I wrote an OpEd on the case in the Irish Times the following day.

There will be lasting consequences in London, Brussels, Belfast and Dublin

Many of the myths about the United Kingdom’s constitutional settlement were on show in Tuesday’s decision by their supreme court that the UK government needs an act of parliament to begin the process of leaving the European Union.

The second myth is that parliament is supreme above all other sources of power or authority. True, legislation enacted by parliament cannot be struck down on foot of UK constitutional doctrines, but there are many checks upon parliament’s freedom to act. Parliament is often simply subservient to government, which frequently acts without parliamentary leave. Tuesday’s decision restated the balance between parliamentary supremacy and governmental autonomy.

The third myth is that the queen’s role is largely ceremonial. True, there are now very few substantive royal powers which are exercised by the monarch, but this is because they are exercised by the government instead. This royal prerogative is one of the core principles of the UK’s unwritten constitution, and it provides an important means by which government can act autonomously of parliament.

The conduct of international relations is a central element of the royal prerogative, and it means that the government can conclude and withdraw from treaties without the involvement of parliament. On the other hand, the rights of UK citizens and residents are matters for parliament, and they cannot be affected by the government’s exercise of the royal prerogative. In Tuesday’s decision the majority held that withdrawal from the EU was not just the conduct of international relations, it also affected the domestic rights of UK citizens and residents.

Consequently, the government cannot rely on the royal prerogative but instead needs an act of parliament to begin the process of leaving the EU.

In London, the decisive reaffirmation of the supremacy of parliament means that Brexit requires legislation, but the judgment does not prescribe any particular form or substance for it. In the short term there is a great deal of politics to be done by government in presenting the necessary bill, and by parliament in considering – and ultimately passing – it. In the long term, the judgment will be a constraint on the government’s freedom of movement independently of parliament.

In Brussels, there will be some relief that the constitutional requirements by which the UK can withdraw from the EU have been clarified. However, this decision on a matter of UK law says nothing about the EU side of the equation, which is governed by article 50 of the EU Treaty. Many aspects of that article remain unclear, and Tuesday’s decision did not seek clarity about it from the Court of Justice of the European Union (CJEU).

In Belfast, the Assembly will not need to be consulted by the UK government before starting the article 50 process. Tuesday’s judgment held that relations with the EU are a matter for Westminster, and not for the devolved assemblies. In the short term this will not add a further fly to the Stormont electoral ointment. However, in the long term, a political – if not a legal – role for the devolved assemblies in the article 50 process is not precluded by the judgment and cannot be ruled out.

UK lawyers
In Dublin, Tuesday’s decision makes it much more likely that the case being brought here by UK lawyers including Jolyon Maugham seeking clarification of article 50, will get off the ground. The Government here will then have to decide not only how to conduct the Brexit negotiations in Brussels alongside the other EU states, but also how to respond to that litigation.

If, in that case, it objects to a reference to the CJEU on the question of whether the UK government can revoke the process of withdrawal, it will doubtless mollify the UK government, but likely annoy our EU partners who would probably welcome certainty on this issue. Tuesday’s decision has brought closer the dread day when the Irish Government will have to choose between standing by the UK and cleaving to the EU.

Finally, Tuesday’s judgment is a strong avowal that, in parliamentary democracies, governments cannot act independently of parliaments. It may have been couched in dry and careful legal language, but it is the stuff of which constitutional myths and political realities are made.