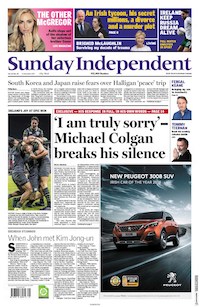 Last week, the Long Room Hub in Trinity College Dublin and the Heyman Center for the Humanities in Columbia University, New York co-hosted a series of events in Dublin and New York on the challenges fake news poses to modern society. In yesterday’s Sunday Independent, Breda Heffernan reported on one of the Dublin events that fake news is a dark menace to truth, democracy and discourse.

The previous night, the Hub had hosted a (slightly controversial) Behind the Headlines event on freedom of speech: Where Journalism and the Law Collide at the Boundary of 21st Century Debate, featuring Fionnán Sheehan (Editor of the Irish Independent), Professor Todd Gitlin (of Columbia Journalism School), Andrea Martin (a media lawyer in practice in Dublin), and myself. Ryan Nugent reported in the Irish Independent the following day that traditional and social media are ‘not on a level defamation playing field’. Our four talks have been podcast on SoundCloud by the Hub; Todd’s talk is here; and, yesterday, the Sunday Independent published Andrea’s and mine. These two pieces appeared in the print edition yesterday morning, but not online until last night. Under the headline The critical balance: protecting our name vs free expression, Andrea argued that high costs and unpredictable juries can make defamation litigation a potential lottery. Here’s what I said:

From censorship to fake news, propaganda and the power of social media platforms, the truth is under siege.

Four challenges to freedom of speech require immediate attention. They are: state censorship; the power of social media platforms; state propaganda and misdirection; and fake news. Reform of the law to meet these challenges must assert traditional free speech values in the new contexts and must be supported by other practical responses.

The first modern challenge to freedom of speech is plain, old-fashioned censorship, where a state’s laws restrict disfavoured speech. States do this directly, where the law simply bans speech (for example, the crime of blasphemy appears in the Defamation Act 2009 because of the reference to blasphemy in the Constitution). States also do this indirectly, where the law allows private actions to restrict speech (for example, crippling damages in defamation cases encourage self-censorship by journalists and editors).

Recent online commentary around high profile criminal trials raises the question whether protections to ensure fair trials (for example, the rules around contempt of court) are capable of applying online. In theory, these laws apply equally offline and online. In practice, since they were designed for the former, they struggle to regulate the latter.

We have got the balance wrong here, tolerating too little speech offline, and enabling too much online. But, in response, we must not make the mistake of over-regulating online speech, simply because we’ve already made the mistake of over-regulating offline speech. Instead, reform of the law would reassert traditional speech values and support more speech – offline as well as online.

We will have a golden opportunity to do when there is a referendum on removing blasphemy from the Constitution. This will allow its repeal from the Defamation Act. Indeed, the Department of Justice is currently undertaking a review of that Act – and that review should repeal the legal rules that underpin the highest defamation damages in Europe. Other current reviews looking at online commentary about criminal trials must guard against the extension of plain old-fashioned censorship from the analogue world to the digital.

The second modern challenge to freedom of speech is posed by the size and power of social media platforms. The social media companies are so large enough that their decisions to restrict the speech of their users is functionally the same as when a state decides to censor speech. This is so where platforms suspend or delete accounts, or prevent searching for specific hashtags, or remove content, or implement policies that make anonymous speech difficult if not impossible.

Some regulators are alive to the problems of platform power. Privacy watchdogs in France and Spain have recently fined Facebook for data protection breaches. The EU Commission recently fined Google for manipulating search results. But these are piecemeal responses. Proper reform of the law here would ensure that the standards we apply against plain, old-fashioned state censorship would also apply against newer private censorship exercised by the social media platforms. Although this is problematic in the US, it is more than possible under the Irish and German constitutions.

The third modern challenge to freedom of speech arises where the state uses every means at its disposal – especially new media channels – to discredit and drown out disfavoured speech. Technological blocking, pervasive online propaganda, and weaponised social media misdirection have been pioneered by China and Russia to supplement plain old-fashioned censorship.

The Great Firewall of China is a potent combination of technology, legislation and policy that blocks or marginalises disfavoured websites, internet services, and mobile apps. Turkey’s internet censorship machine is increasingly effective. Meanwhile, Russia has incorporated many elements of the Great Firewall into its equivalent Red Web. Moreover, its web brigades of fake accounts push government propaganda on an industrial scale. In China, many social media posts are made by public employees at the government’s behest, timed to overwhelm dissent at key moments.

Like a conjuror waving one hand to distract attention from the trick being done by the other, the really nefarious Russian and Chinese censorship doesn’t ban disfavoured speech so much as effectively drown it out. These techniques are sophisticated and widespread – and are now favoured by Trump’s White House as much by the world’s dictators.

Reform of the law would assert traditional speech values in these new contexts. Propaganda and misdirection require the active connivance of the state and rely on the passive complicity of the citizen. To prevent this state action, we need robust interpretation of constitutional limitations upon it, especially of constitutional speech guarantees. Even if this is no longer possible in China, Russia, Turkey and their ilk, it is nevertheless still possible – and necessary – in Western constitutional democracies. Indeed, the Irish Supreme Court has shown the way, in its repeated holdings that the State cannot spend money on one side of a referendum.

Hand in hand with these legal developments, we must work to prevent the passive complicity of the citizen, by providing the social and educational tools to understand and deal with such propaganda and misdirection. Now that we have had a glimpse behind the curtain at insidious modern censorship, we must learn from the experience – or suffer the consequences.

The fourth modern challenge to freedom of speech is posed by the online armies of bots and trolls spreading hate speech and fake news. Legislators are increasingly saying that the platforms must do something about it. German law now requires them to do more to take down illegal content. They have recently agreed a code of conduct against hate speech with the EU. The United States is close to adopting legislation to make it easier to penalize websites that facilitate online sex trafficking. And, in the face of mounting concern about Russian influence in last year’s US presidential election, the platforms have promised more transparency about political advertising, even as Senators scrambled to introduce legislation requiring them to do so.

Nevertheless, the assertion of traditional speech values here suggest that we must not over-legislate against the platforms, making them liable simply out of frustration at not being able to reach the real bad guys. The primary legal responsibility for posting illegal content is with whoever posts it – and US and EU law currently says that the platforms are responsible for it only once they have notice of it. This balance is one of the legal foundations upon which the internet has been constructed – and if too much responsibility is moved from the poster to the platform, the disruption of this balance would be catastrophic for the internet.

Practical responses will also be crucial here. The Paradise Papers exposé of questionable offshore tax practices and RTÉ’s undercover investigation into substandard accommodation make the case for traditional journalism and public service broadcasting. The law should not make it more difficult for them to meet online challenges. But a blunt levy on online news (such as the EU is about to introduce) is not the answer: digital innovation around news will suffer as a consequence.

Freedom of speech faces many challenges in the modern world. The legal reforms and practical responses necessary to meet these challenges will not be easy. But they are essential to ensure that freedom of speech survives – both offline and online.