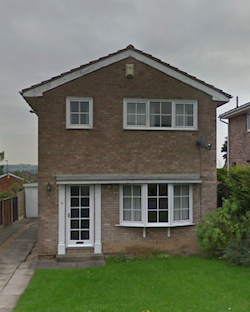 The question in the title was provoked by Ciara Kenny‘s House Hunter column in today’s Irish Times, where she ask Would you buy a house someone had been murdered in? I don’t think I would. And if I did, I’d be stuck with it, since the answer to the question in the title to this post is that you can’tget out of the purchase of a house, if you find out later that someone had been murdered in it. Ciara’s column is a diary of her travails trying to purchase a house in Dublin in today’s crazy property market (as she put it on twitter: it’s an effing nightmare). From today’s column:

Every old house has its secrets. Last summer, a gorgeous house came up for sale which we spent weeks deliberating over. But we couldn’t shake a bad feeling we had about the surrounding streets. So when bidding climbed above what we were willing to pay, we were relieved for once. … [Later, my partner found] a decade-old RTÉ news report about a man stabbed to death by a burglar on the stairs. … I don’t think I would be able to shake the image of that poor man’s violent death every time I walked upstairs.

If Ciara had bought the house, and later discovered its gruesome past, she would not have been able to reverse the transaction. In Sykes v Taylor-Rose [2004] EWCA Civ 299 (27 February 2004) the defendants purchased 16 Stillwell Drive, Sandal, Wakefield (pictured above left, via Google Streetview) in September 1998. The following March, they received an anonymous note with photocopies of newspaper reports of a trial of a previous owner who had murdered his adopted daughter there in 1985. Their solicitor advised them that the vendor of the property at the time of the 1988 sale had not been under an obligation to disclose the history, and that they would be under no such obligation when they came to sell it. They continued to live there for a further 18 months, and then sold it to the plaintiffs in December 2000. They, in turn, discovered the property’s infamous past from a television programme shown in July 2001. They moved out, and sought damages from the defendants for misrepresentation. The High Court concluded that the respondents were not under a duty to disclose that the murder had taken place at the property, and there was no appeal on that point. As O’Flaherty J said in O’Donnell v Truck and Machinery Sales [1998] 4 IR 191, 202

In general, mere silence will not be held to constitute a misrepresentation. Thus, a person about to enter into a contract is not, in general, under a duty to disclose facts that are known to him but not to the other party.

That was the situation in Sykes v Taylor-Rose, where the defendants were not under any duty to disclose what they knew about the murder to the plaintiffs. In O’Donnell, O’Flaherty J continued that

in certain circumstances, such a party may be under a duty to disclose such facts. A duty of disclosure will arise, for example, where silence would negate or distort a positive representation that has been made, or where material facts come to the notice of the party which falsify a representation previously made.

Here, the defendant agreed to buy eighteen new Vovlo L150 mechanical shovels from the plaintiff, on foot of representations that they were of the highest standard and comparable in every respect to the leading competitor, the Caterpillar 966. The defendant asked that they be fitted with bigger wheels which were standard on the Caterpillar, and the plaintiff complied, but did not warn that the bigger wheels would result in a loss of performance. When the defendant failed to pay, the plaintiff sued for the purchase price, and the defendant counter-claimed for rescission of the contract on the ground inter alia that this failure to warn amounted to a misrepresentation. Moriarty J in the High Court ([1997] 1 ILRM 466) agreed, but the Supreme Court (O’Flaherty, Lynch and Barron JJ) reversed. O’Flaherty J explained that, to succeed in this regard, the plaintiff’s silence

… must actually have distorted the positive representations that he made regarding the comparability of the L150s to the Caterpillars. Clearly, it did not so distort the representation made. The matter of the necessity or not for a warning is something totally divorced from such representation as was made.

In Sykes v Taylor-Rose, the plaintiff purchasers tried a similar argument, and it met with the same fate. During the negotiations for the December 2000 sale, the plaintiffs had asked the defendants “Is there any other information which you think the buyer may have a right to know?”; the defendants had answered “no”; and the plaintiffs alleged that, having regard to the 1985 murders, this answer was a misrepresentation. The High Court concluded that it was not, and the Court of Appeal agreed.

Many US states have laws requiring vendors and their estate agents to disclose past events that might devalue a property, including sometimes whether the house is haunted. But that is not the case in the UK or Ireland. The moral of the story is that vendors of property are under no obligation to disclose the history of the house. Some buyers will be happy to get a lower purchase price because the history depresses the demand, and a few will actually be happy to purchase a house with a grisly history; but, for majority of buyers, they must beware.

Updates: picking up on this, the Irish Times the following week ran this story:

Jessbrook, the former home of convicted criminal John Gilligan has been declared “sale agreed”, … The house was seized by the Criminal Assets Bureau in February 2017 after Gilligan’s 20-year fight to retain it. .. But it prompts the question – what happens to houses with a notorious past, after the dust settled? All homes above a certain age have ghosts, but what if it’s an infamous ghost? And what if you don’t know about a house’s notoriety until after you buy it?

Eoin O’Dell, … last week … [said] that a vendor is not obliged to disclose the history of a house. And a buyer cannot pull out of the purchase if they later find out that some shadow hangs over it.

Brian Dempsey, partner at [estate agents] DNG, confirms that “there is no onus on an agent to tell a buyer about what’s happened in a house. We would be expected to answer honestly if asked of course, but there is no obligation to volunteer the information. …” …

This is a perfect summary of Sykes v Taylor-Rose, and it applies whether the house is haunted or whether it is Ciara Kenny’s murder-scene house. In a later column, Ciara writes that she and her partner finally got a house, and the scariest thing about it was the price!