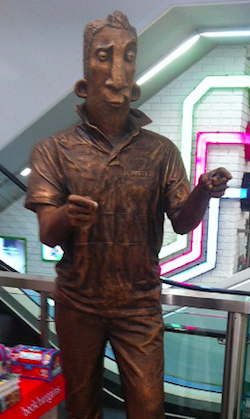 In today’s Irish Times, this week’s instalment (audio here) in the ongoing mis-adventures of Ross O’Carroll-Kelly (pictured left) intersected with this blog. Ross is a hapless dad and clueless (if ruthless) estate-agent, who has been described as “Ireland’s most eligible married man” and “the greatest Irish [rugby] player never to actually make it in the game”, and the scene opens with our hero being summoned by the boss:

It’s, like, just before midday when Lauren tells me she wants to talk to me in her office. … She goes, “What do you know about GDPR, Ross?”

Oh, that shocks her – such is my reputation for being as stupid as a goose.

She’s like, “Okay, tell me what you know about GDPR.”

“First,” I go, “you make sure the patient is comfortable by putting some kind of cushion under their head and loosening any tight clothing. Then, you place the heel of your hand on the patient’s breastbone, with your other hand on top of it, interlocking your fingers …”

And so it goes on for a while, until Dave – “from Human Resources (formerly Payroll)” – arrives, and asks Ross where his laptop is. Poor Ross. We know from last week’s column (audio here) that he had left his car unlocked at a filling station, from which someone stole his “laptop bag, a briefcase and three Donnybrook Fair shopping bags out of the boot”. So, Ross eventually comes clean to Lauren:

I’m there, “Okay, I’m going to be finally honest with you. They were stolen from the boot of my cor when I pulled in to get petrol. Was there any sign of the three shopping bags from Donnybrook Fair that were also taken? There was six tins of individually, line-caught, white tuna fillets in there that cost 11 yoyos per pop.”

“Why didn’t you tell me about this?”

“Er, why would I tell you about it? It was my laptop. They were my client files.”

“I’m the Managing Director of this estate agency, Ross. It’s my responsibility to report breaches to the Data Protection Commissioner as soon as they’re discovered. Do you know what the penalties for this could be?”

And that’s when she says it. She fixes me with a look and goes, “You’re fired, Ross.”

As he will no doubt quickly learn, GDPR stands for the EU’s General Data Protection Regulation. It, and its incorporating Irish legislation, came into effect on Friday 25 May 2018. And the theft of the laptop and files (and, let’s not forget, tuna fillets and other overpriced groceries) came to light in the column published on Saturday 26 May. If the Saturday column is real-time reportage, or if it is reporting something that happened on Friday, then the data breach happened after the GDPR and Irish legislation came into force, and Lauren does indeed have to report it to the Data Protection Commission. However, if the column is reporting something that happened earlier in the week, then the GDPR was not in force, and the Rossmeister might just get away with it – again.