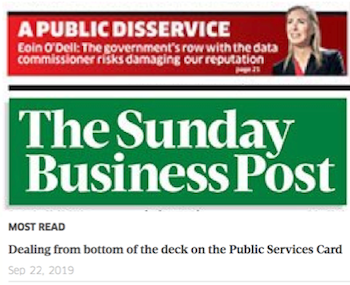 On Tuesday of this week, belatedly and with very bad grace, the Department of Employment Affairs and Social Protection published the Report of the Data Protection Commission (DPC) on the Public Services Card (#PSC), which concluded that the government’s implementation of the PSC infringed data protection legislation. The government has refused to accept or comply with the Commission’s findings, and has instead, for reasons beyond understanding, gone to war with the DPC on this issue.

In my view, the Government’s unjustified defiance of the DPC imperils Ireland’s tech reputation; and I argue in an OpEd in today’s Sunday Business Post (sub req’d) (update: you can download it from the links in update 3 below) that this unseemly standoff must be resolved as quickly as possible, before irreversible damage is done to our international standing as a good location in which international tech companies can establish their European headquarters:

Dealing from bottom of the deck on the Public Services Card

The government is clinging to its legal advice on the PSC data fiasco. It needs to admit it was wrong and change course immediately

… The DPC’s report is very clear; its fundamental conclusions will undoubtedly survive legal challenge; and the government will eventually be as surely taken to task in the courts in Dublin and Luxembourg as it has been his week in the court of public opinion.

… A government in such open conflict with the DPC can have no credibility in seeking to ensure that such companies comply with the Commission’s decisions. Worse, it risks fostering the view that a company unhappy with an unfavourable DPC decision could seek government help to resist that decision. …


Update 1 (Sunday, 22 September 2019): in the discussion of the PSC (from 1:25) on Marian Finucane on RTÉ Radio 1 this morning, Jeanne Kelly quoted the piece, that it is plainly a good thing that the Commission has defended its independence in this way, but that it is not a good thing that it has had to do so. Thanks, Jeanne.

Update 2 (Monday, 23 September 2019): at the start of a 5-day diplomatic and trade mission to New York and Los Angeles, on Monday 23 September 2019, during a statement at the Leaders Dialogue on the Christchurch Call, at the United Nations in New York, the Taoiseach, Leo Varadkar, said:

Really? Really, really?? Well, if the government really does take these responsibilities seriously, then it should stop seeking to undermine the existing regulatory structures.

Update 3 (Tuesday, 24 September 2019): I am grateful to the Sunday Business Post for allowing me to post my op-ed for download here (.doc) and for providing a hi-res pdf of the page containing it.

Update 4 (Thursday, 26 September 2019): there was a debate on the PSC in the Dáil last night, in the course of which Willie O’Dea, TD quoted the OpEd:

The Government’s approach damages Ireland’s reputation as a good location for international tech companies. As Professor Eoin O’Dell, an expert in the subject, put it in The Sunday Business Post on 23 September 2019, “A government in such open conflict with the DPC can have no credibility in seeking to ensure that such companies comply with the commission’s decisions.” The conflict between the Government and the DPC, despite the protestations of respect and so on, creates the impression to outside observers that if a company is ruled against by the DPC, the company could enlist the aid of the Government and get the commissioner’s decision overturned. That is an unhealthy state of affairs.

Update 5 (Friday, 27 September 2019): the matter also came up yesterday during the consideration of the DPC’s accounts by the Committee of Public Accounts.

One Reply to “The sooner the government changes tack on the #psc, the better for Ireland’s international reputation – updated”