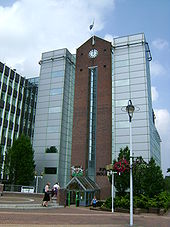 In 2016, Fife was said to be the happiest place to live in Scotland, at least according to the Bank of Scotland Happiness Index. But it may not be quite so happy for a man who was recently overpaid nearly £300,000 by Fife Council and now has to pay it back (that’s Fife House, North Street, Glenrothes, Fife, Scotland, the seat of Fife Council, in the picture). According to Irish Legal News yesterday (also here and here):

It was a monumental banking blunder from an administrative worker at the council who made a “keying error“. This resulted in five massive weekly overpayments during July and August, before council officials discovered the error. This is a spectacular example of a butterfly-effect typo; and Irish Legal News has another example today: a judge calculating a half-billion dollar damages award typed $107 million rather than $107 thousand into his calculator.

Hence, to remain happy, the recipient of Fife Council’s largesse must return the money as a matter of law, since it would be recoverable by them in a condictio indebiti as money paid in error.

3 Reply to “Another butterfly-effect banking typo, another mistaken overpayment, another example of restitution for unjust enrichment”