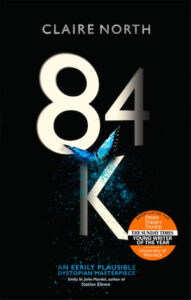 A little while ago, I read Claire North’s 84K (Orbit; Little, Brown Book Group, London, 2018) (cover left). It is a stunning novel, vividly conceived and brilliantly executed, and I cannot recommend it highly enough. But my reasons for mentioning the novel here concern not so much its literary merits, but also how best to describe the world so chillingly realized within its pages.

Published after the Brexit referendum, but before the UK had left the EU, it is set in a post-Brexit England of the very-near future, where (a man called) Theo Miller works in the Criminal Audit Office. His job is to assess crimes and calculate the indemnity that the perpetrators must pay to ensure their debts to society are paid in full. Those unable to pay the indemnity are set to forced-labour in prison. The indemnity system is regularly described in the book as much more efficient than the alternatives. Moreover, everything is run by a company that’s owned by a company that’s owned by THE Company. In the ultimate example of business efficiency taking over from creaking public authorities, the government has licensed the Company to collect taxes: the Company pays the government £400b and keeps any profit above and beyond that. North “is walking a well-trod dystopian path” (Jason Sheehan); 84K is set “in dystopian Britain” (Lucy Hughes-Hallett); it is an “eerily plausible dystopian masterpiece” (Emily St John Mandel; on the front cover), and “a claustrophobic and disjoint story that stands with the best of hard and hopeless dystopian s[cience] f[iction]” (Cory Doctorow). Except it isn’t. Though deserving of all its plaudits, and claustrophobic and hopeless, it is not dystopian so much as dysagurian.

In my post “The privations of privacy: from dystopia to dysaguria”, I argued that dystopia describes when the military/security state goes bad, that we don’t have an appropriate word for when the industrial/corporate society goes bad, and that it’s beyond time we had one. To fill that gap (and by analogy with the coinage of “dystopia” meaning “frightening state”), I suggest “dysaguria”, as a noun meaning “frightening company”, and “dysagurian” as the adjective to describe that company and the associated society run by frightening companies. In that post, I argue that Dave Eggar’s novel, The Circle, is dysagurian, rather than dystopian. In subsequent posts, I argue that “dysagurian” is the most appropriate adjective for Gryzzl on Parks and Recreation, for Centillion in “The Perfect Match”, a short story in Ken Liu’s The Paper Menagerie and other stories (Head of Zeus, 2106), and for the society in the Duncan Jones movie Mute.

Not only is 84K a profound exploration of dysaguria, it is exceptionally well-written, full of wry turns of phrase and deft social observations. I was particularly struck by the journalist who was “done for libel. The indemnity was £329,560” (p175). By contrast, Theo sets indemnity for the manslaughter of the poor, uneducated former convict Dani Cumali at £84,000 (the 84K of the title of the novel). However, Theo has assumed that name after College (though we never learn what his real name is); and, in setting that indemnity, his carefully constructed life falls away, and he sets out to face his destiny come what may.