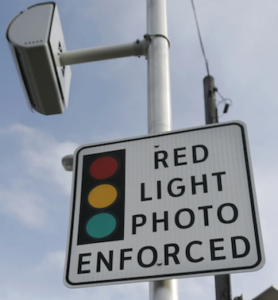 In Pincus v American Traffic Solutions, Inc, Pincus was photographed going through a red light (similar to the one in the photo, right), and he paid a penalty to American Traffic Solutions, Inc (ATS), made up of the statutory penalty and an additional fee for the convenience of paying online rather than by mail. He brought a putative class action (pdf) against ATS in Federal Court, alleging that several Florida statutes barred ATS from charging the convenience fee and that ATS was unjustly enriched by retaining it. The US District Court for the Southern District of Florida dismissed his claim (SD Fla, 14 Jan 2019 (pdf)). On appeal, the US Court of Appeals for the Eleventh Circuit concluded that the plaintiff’s complaint raised several unresolved questions of Florida law, and certified various questions to the Supreme Court Florida, in particular whether any claim in unjust enrichment that the plaintiff may have would fail because he received adequate consideration in exchange for the challenged fee when he took advantage of the privilege of using his credit card to pay the penalty (986 F3d 1305 (11th Cir, 2021) (pdf)). The Supreme Court of Florida answered that question in the affirmative (3 February 2022, No. SC21-159 (pdf)), and the Eleventh Circuit Court of Appeals dismissed his claim (17 February 2022, No. 19-10474 (pdf)).

The key decision is the judgment of the Supreme Court of Florida, where Labarga J (Canady CJ; and Polston, Lawson, Muñiz, Couriel and Grosshans JJ concurring) held that, even if the fee were prohibited by statute:

… ATS’s retention of the fee is not inequitable because ATS gave value in exchange: (1) Pincus did not have to procure postage and a check or money order; (2) he could pay the balance over time; (3) he avoided the risk of his payment being delayed, stolen, or lost en route; (4) he was afforded more time to make the payment because it was instantaneous; and (5) ATS provided immediate confirmation (by way of a “confirmation number”) that Pincus’s payment wasreceived and his obligation to pay the penalty fulfilled. Therefore, it is not inequitable under the circumstances for ATS to retain the convenience fee because it “first pa[id] the value thereof to the plaintiff” …

Accordingly, Pincus’s unjust enrichment claim fails because he has not alleged a benefit conferred and accepted which would be unjust for ATS to retain.

On the other hand, in David Securities Pty Ltd v Commonwealth Bank of Australia (1992) 175 CLR 353, [1992] HCA 48 (7 October 1992), the defence failed on the facts. Customers made mistaken payments to the bank of withholding tax on loans, and sought restitution of those payments from the bank. The bank argued that, since the customer had accepted the benefit of its performance of the loan contract, it had given consideration for the withholding tax. The bank also argued that, if it had know that the withholding tax was not payable, it would have charged the customers a higher interest rate, so that, by not being charged this higher rate, the customers had received consideration for the payments. The High Court of Australia rejected these arguments: the customers had no indebtedness in respect of withholding tax, so that paying it was not made for good consideration ([1992] HCA 48 [51] (Mason CJ, and Deane, Toohey, Gaudron and McHugh JJ, in a joint judgment)). Similarly, in Alfred Street Properties Ltd v National Asset Management Agency [2020] EWHC 397 (Comm) (26 February 2020), the defence also failed on the facts. The defendant, the National Asset Management Agency (NAMA), purported to extend interest rate swaps it had with the plaintiff, Alfred Street Properties Ltd (ASPL), on foot of which ASPL made payments to NAMA totalling £4,778,289.56. The purported extension was invalid; ASPL sought restitution of its payments; and NAMA sought to rely on the defence of good consideration. Philips LJ, (sitting as a High Court judge), held that NAMA had no right to the payments, nor did it have a right to apply monies wrongly received against ASPL’s indebtedness ([2020] EWHC 397 (Comm) [117]). Consequently, he concluded that “if the Swaps were not validly extended, NAMA did not have a right to be paid equivalent sums and so does not have a ‘good consideration’ defence” (ibid [118]).

There is a strong flavour of contractual consideration in Labarga J’s analysis in Pincus v American Traffic Solutions, Inc, with undoubted echoes of the “practical benefits” found to be sufficient considertion in Williams v Roffey Brothers & Nicholls (Contractors) Ltd [1991] 1 QB 1, [1989] EWCA Civ 5 (23 November 1989). Indeed, in Universal Import Export GmbH v Bank of Scotland 1995 SC 73, 1995 SCLR 199, 1995 SLT 1318, [1994] ScotCS CSIH_5 (28 October 1994), Goff J’s dictum was cited in a contractual context in which one question was whether the plaintiffs had provided consideration to the defendants such that the plaintiffs could enforce a bank draft, notwithstanding fraud by third parties relating to it. Lord Ross, the Lord Justice-Clerk, held they could. Similarly, the reasoning of the High Court of Australia in David Securities on this point has been criticised as essentially contractual (Peter Birks “Modernising the Law of Restitution” (1993) 109 Law Quarterly Review 164, 167). On this view, many cases in which good consideration has been said to have been given for a payment “turn out upon close inspection to be decisions where the court found no mistake, or where a benefit was conferred by the defendant necessitating counter-restitution by the plaintiff, or where the consideration created a contract to which stricter rules of mistake apply” (Michael Bryan “Mistaken Payments and the Law of Unjust Enrichment: David Securities Pty Ltd v Commonwealth Bank of Australia” (1993) 15 Sydney law Review 461, 466 (pdf)).

If such arguments are adopted in the common law world outside the US, then Pincus would clearly go the other way. On the other hand, if courts are astute to avoid contractual overtones in the application of the defence of payment for good consideration in the law of restitution for unjust enrichment, there is no reason why Goff J’s dictum cannot continue to be regarded as good law, even if the kinds of matters found to be good consideration in Pincus are not accepted in its application.