I’m not the first, and certainly won’t be the last, to wax enthusiastic and lyrical on the triumph that was last Saturday’s BarCamp Dublin (where I spotted the iso-phone, left). Thanks a million to Joe, Elly, Paul and Eoghan; links seem an inadequate way to express my gratitude, but flowers might be inappropriate, so the adulation of the masses will have to do guys. By way of roundup, EuropeanIrish has a good collection of surveys and reviews (and I hope that as traffic grows over the next while, he’ll update the message as a good resource about the day).

After my own presentation, I could relax and enjoy the day: coffee, sandwiches, chat, and high quality content. Oh the agony of indecision: too much to do, too little time. I went to Darren, John, Eoghan, the Plenary (as if he didn’t have enough to do running the day, Joe moderated a penal panel made up of Tom, Darren (again), Sean, and Karlin), Antoin and Krishna. I could just as easily have gone to any of the parallel sessions and had just as good a time. I’m going to write about Antoin’s presentation in my next post, in part because it was about a really great idea, and in part because it raised interesting legal issues I want to take a bit of time to consider. And I’m not going to write in detail about any of the presentations here either, in part because those who have already written about the day have done that already (and there’s no point in reinventing the wheel), and in part because the speakers are putting up their slides on their own sites, so you can check out their own words rather than taking my word for it. But I do want to make a few observations about various comments made by them during the day. 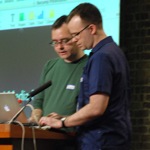 I remember this one time, at BarCamp, I went to Darren Barefoot’s presentation because I liked his Get a First Life page, and participated in his survey, so I thought I’d check him out in the real world. His title, â€œSocial Media Marketingâ€?, sounded interesting; and his presentation was excellent (slides and links here). Not only did he give an object lesson in the power of keynote (that’s Joe (l) and Darren (r) in the photo, fighting the technology before Darren’s talk), but he peppered his presentation with wonderful turns of phrase like:

and then, in the context of his title, he gave the following pieces of advice for social media marketing:

Sage insights all. But then, I thought at the time, he went and spoiled it all, two minutes before the end of a great hour, by quoting the hoary old Marshall McLuhan (official site | wikipedia) aphorism that “the medium is the message”. However, having had the benefit of mature reflection, I now think that, for once, perhaps it is an appropriate application of McLuhan’s thesis that the message is irrelevant, it is the form of the medium itself is what changes our consciousness.

I remember this one time, at BarCamp, I went to Eoghan McCabe’s presentation on “Web Usability 101”, a 30 minute crash course on useability design in websites, because I have a website and blog (you’re reading it) and want to make them look pretty and work well. The website is currently down for a redesign, and, after listening to Eoghan’s excellent advice, I think I’d better think it out again! It’ll be down for some time yet.

I remember this one time, at BarCamp, I went to John Ward’s presentation because I have tried to buy car insurance online, and I was fascinated to hear of his experiences of “Selling Web2.0 to Financial Institutions”, both in the sense of getting funding for a web2.0 project, and in the sense of pitching that web2.0 project (a portal which compares online car insurance offerings and through which it can then be purchased) as a service to financial institutions. That’s John in the photo on the left. His best line:

I remember this one time, at BarCamp, I went to the Plenary because there was nothing else on at the time. That’s Suzy, Joe, Tom, Sean and Darren; Karlin’s just out of shot – sorry, Karlin; blame the photographer :-)). After Suzy’s call to election arms (count me in), the tone was set by the very first Q&A:

During an engaging freewheeling discussion, there were lots of comments about the long tail, early adopters of blogging, controversy as a strategy for building readership, and so on, during which Darren came up with another good insight – that the threats to Cathy Sierra are an inevitable consequence of celebrity, and of the extension of profile: high profile bloggers now have sufficient purchase on public consciousness to attract the stalkers and worse that are the dark side of celebrity today.

I remember this one time, at BarCamp, I went to Krishna De’s presentation because there was no more coffee. More to the point, I thought it would be a good fit with Darren’s presentation, and it was. It pretty much took up where his left off. Her five Ms of business blogging (market; myths; must haves; money matters; and moving forward) filled in the practicalities of implementing the kind of vision articulated by Darren. It was, for me, a great pity that there was no public discussion between these two on the day – an idea for a future BarCamp, perhaps. I’ll go to that one, too.

14 Reply to “I remember this one time, at BarCamp”