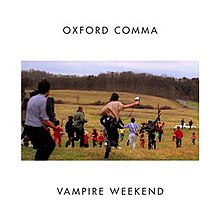 Some stuff I’ve come across online recently has reminded me of the New York indie rock band, Vampire Weekend, not only the high-profile controversy over the “frustrating” lawsuit against them by a model who claims that they did not have her permission to use an image of her on their “Contra” album cover, but also the lyrics of their 2008 single “Oxford Comma” (pictured left; see background | lyrics | music | YouTube). The Oxford comma is an optional comma before the word ‘and’ at the end of a list; in the song, it’s a metaphor for unnecessary pretention in interpersonal relationships; and in its grammatical meaning it has recently been the focus of discussion by pedants, geeks, and drafters.

Pedants
The Oxford comma (aka the Harvard comma or the Serial comma) is the comma in a list that goes before the “and” or “or” that precedes the last item in the list. In the title to this post, it’s the comma between “geeks” and “and”. In such a straightforward setting, using it or not is more a matter of individual preference than grammatical necessity; and there are many people whose preference is to use it. However, there are times when it is absolutely crucial:

… the important thing about it, though, regardless of its name, is that it looks like any ordinary comma, and, for the most part, acts like any ordinary comma, except that this comma, plain as it is, does something extraordinary–it guards against the ridiculous. … what if a young lady places an ad in the ‘Personals’ to tell us that she enjoys dining out, long hikes in the woods, holding hands and playing the guitar. I play the guitar, and let me assure you, it is difficult to hold hands and play the guitar.

In this example, the absence of the Oxford comma leads to an ambiguity which its presence would avoid. Where items in a list are equal, they sould be treated equally, and thus separated by a comma. The comma may reflect the cadences of the spoken word; it may be necessary in computer programming; it is often simply more natural to use it. For all these reasons – as the title to the post implies – I prefer to use it. It will rarely be ambiguous, and it will usually be more accurate.

Geeks
In using it, I suspect I am like many other lawyers. For example, David Post, blogging at Volokh (picked up by Legal Blog Watch | ProfessorBainbridge | Something About The Law ), bemoaned its increasing absence, and argued [with added links]:

… use of the serial comma expands the possibilities for communicating nuance of meaning, and is therefore an unmitigated Good Thing. The classic illustration is this:

In the first edition of Frost’s Collected Poems, that line (from “Stopping by Woods on a Snowy Evening”) was printed as in (a), but it was corrected in subsequent editions. The point is that the two lines have different meanings — in the first, the woods are lovely; “dark and deep” then becomes a descriptor or illustration of that loveliness. In the second, the woods have three separate characteristics: they’re lovely, they’re dark, and they’re deep. …

In this way, it becomes clear that insistence upon the Oxford comma is not a matter of pretention or pedantry, but of accuracy and necessity.

Drafters
Though the absence of the comma is often comic, it can equally well have serious consequences. Accuracy matters. Roger Casement is said to have been hanged on a comma in the Treason Act. A current case against Chrysler in the US, for US$16,000 in damages and US$124,894.02 in legal fees, turns on the presence of a comma. More than Can$2m were at stake in a dispute between Rogers Communications Inc and Aliant Inc before the Canadian Radio-television and Telecommunications Commission. The contract was signed in English and French; its English draft provided it that

shall continue in force for a period of five years from the date it is made, and thereafter for successive five year terms, unless and until terminated by one year prior notice in writing by either party.

The CRTC originally held that, based on the rules of punctuation, the comma in question allows for the termination of the contract at any time, without cause, upon one-year’s written notice. However, having compared the French draft, which provided that the contract “demeure en vigueur pour une période de cinq ans, à partir de la date de la signature et il est subséquemment renouvelé pour des périodes successives de cinq années, à moins d’un préavis écrit de résiliation à l’autre partie un an avant l’expiration du contrat” (emphasis added), it then held that termination can only occur upon notice one year prior to the end of the initial five-year term or one year prior to the end of a renewed five-year term.

Since this accuracy with commas matters, care should be taken in the drafting of statutes, contracts, and the like. Ken Adams advises that

… the question for the contract drafter is not how to make sense of a dispute but how to avoid dispute in the first place.

The simplest approach would be always to use the serial comma in a simple list of three or more items. It’s very unlikely that you’d find yourself in a situation where a serial comma creates ambiguity rather than resolves it.

Even if Vampire Weekend don’t care about the Oxford Comma, lawyers – whether pedants, geeks, or drafters – most definitely should.

5 Reply to “Who cares about an Oxford comma? At the very least: pedants, geeks, and drafters!”