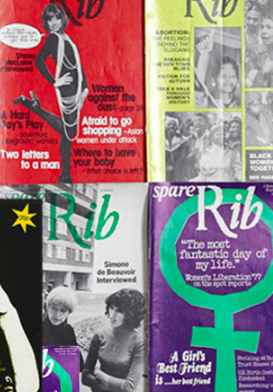 Spare Rib, the trailblazing women’s magazine that defined generations of feminism, faces the axe from the British Library’s digital archive if there is no Brexit deal, it has emerged

The magazine ran from 1972 to 1993, and all 11,000 articles, cartoons and photographs were made digitally available in 2015 as part of the joint efforts of the British Library (BL) and the Spare Rib Collective.

In 2015, as part of our commitment to making our intellectual heritage available to everyone for research, inspiration and enjoyment, the British Library digitised and made available the full run of the feminist magazine Spare Rib available via the Jisc Journals platform.

The EU orphan works directive currently allows … material [where the rights-holder cannot be identified after a diligent search] to be made available by cultural heritage institutions. Around 57% of the Spare Rib archive – some 11,000 articles and images from 2,700 contributors – benefits from this protection.

Should the UK exit the EU without a withdrawal agreement, however, we have been advised by the Intellectual Property Office (IPO) that this legal exception will no longer apply. In those circumstances, the Library would have to suspend access to the archive or be in breach of copyright.

7.10 … the Orphan Works Directive … was inserted by the Copyright and Rights in Performances (Certain Permitted Uses of Orphan Works) Regulations 2014. It provides for a copyright exception for cultural heritage institutions to digitise and make available to the public, across the EU, orphan works (copyright works where the right holder is unknown or cannot be found). The exception works by recognising the orphan status of works across the EU, as long as a diligent search has been completed and the details entered onto a database held by the EU Intellectual Property Office (EUIPO). When the UK leaves the EU, this mutual recognition will fall away and the EU will not recognise the orphan status of works that UK libraries, museums, and other cultural heritage institutions place online, and the UK will not have access to the database held by the EUIPO. Consequently, the European orphan works exception will come to an end on exit. UK cultural heritage institutions will no longer be able to make available online across the EU orphan works, under an exception to copyright. However, cultural heritage institutions in the UK will still be able to make use of the UK’s existing domestic Orphan Works Licensing Scheme …

Unlike other sectors where anomalies like this are dealt with in the politically-controversial Withdrawal Agreement (the Agreement on the withdrawal of the United Kingdom of Great Britain and Northern Ireland from the European Union and the European Atomic Energy Community, as endorsed by leaders at a special meeting of the European Council on 25 November 2018 (pdf)) (the most recent controversy is here, also from today’s Guardian), the text of Title IV on Intellectual Property is silent on the issue of copyright in general, to say nothing of orphan works in particular. Section 2 of the European Union (Withdrawal) Act 2018 provides a saver for “EU-derived domestic legislation” to continue to have effect in domestic law after the UK leaves the EU. And this is sufficient to save much EU-derived copyright law. But, because of the trans-border operation of the Orphan Works Directive (Directive 2012/28/EU of the European Parliament and of the Council of 25 October 2012 on certain permitted uses of orphan works (OJ L 299, 27.10.2012, p. 5–12), and the role of the EU Intellectual Property Office (EU IPO) in hosting the Orphan Works Database, section 2 of the Act is insufficient.

Of course, it won’t just be Spare Rib that’s affected, though that makes for an eye-catching headline. It will anything in the British Library’s digital collection that relies on registration with the EU IPO. Moreover, I wonder whether this cuts both ways: to the extent that EU collections rely on British registrations with the EU IPO, will those collections be able to rely on the Orphan Works Directive after Brexit? The logic of the UK IPO’s position suggests not.


Update (26 February 2019): Writing on his Ipso Jure blog, Peter Groves was just as surprised by the Guardian story as I was; and his first thought (just as it was mine) was that the Orphan Works Directive would “surely remain part of UK law”. Even if it is not carried over, he thinks that existing UK orphan work registrations with the EU IPO would continue to have effect in UK law: if the British Library “has published stuff in reliance on the fact that it was in the database then it seems to have complied with” UK law. And he concludes on this point:

It looks as if Cultural Heritage Institutions in the UK will no longer be able to look at the EUIPO database (which seems a bit miserly) so in future it would be impossible to comply with [the UK legislation]: but that doesn’t have to destroy the legal basis for the Spare Rib archive.

Update (14 January 2021): And lo, it came to pass that, as threatened by the UK government, the EU’s orphan works copyright exception was indeed repealed from UK law from 1 January 2021, leaving only a limited UK scheme in its place. The JISC/British Library Spare Rib is indeed no longer available, along with mountains and mountains of other material. This act of self-inflicted cultural vandalism is yet another petty and unnecessary consequence of Brexit. Oh dear, oh dear, oh dear.