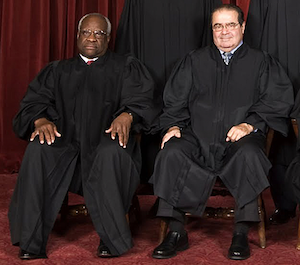 “I’m an originalist, but I’m not a nut”. This is how the Pontiff of Originalism, Justice Antonin Scalia (seated right), reportedly replied, when he was asked to compare his judicial philosophy to that of his US Supreme Court colleague, Justice Clarence Thomas (seated left). As of Thursday, Thomas J’s nutty originalism is in the ascendancy in the US Supreme Court. In New York State Rifle and Pistol Association v Bruen (23 June 2022; — US — (2022); Opinion pdf | Cornell htmi), the US Supreme Court held that a New York restriction on carrying firearms unconstitutionally prevented law abiding citizens with ordinary self-defense needs from exercising their Second Amendment right to keep and bear arms in public for self-defense. Referring to District of Columbia v Heller 554 US 570 (2008) (pdf) (which I critiqued here) and McDonald v Chicago 561 US 742 (2010) (pdf), the Court held that, to justify a firearms regulation, the government must demonstrate that the regulation is consistent with the Nation’s historical tradition of firearms regulation; as a consequence, the Court rejected any standard of review such as strict or intermediate scrutiny (which it described as “means-end” balancing tests). The Court identified firearms regulations that were consistent with the Second Amendment’s text and historical understanding, but held that none directly or analogically justified New York’s requirement that an applicant for a license to carry firearms outside the home had to demonstrate “a special need for self-protection distinguishable from that of the general community”. Lower courts had tried to make sense of the history by saying that the 18th century restrictions were capable of being explained as instances where at least an intermediate level of “means-end” scrutiny had been satisfied, so that the question became whether modern restrictions also satisfied intermediate scrutiny (see, eg, “Post-Heller Second Amendment Jurisprudence” (CRS, 2019) pp15-16 (pdf); Lawrence Rosenthal & Joyce Lee Malcolm “McDonald v. Chicago: Which Standard of Scrutiny Should Apply to Gun Control Laws?” 105 Northwestern University Law Review 437 (2015)). But the Court here expressly rejected that approach as ahistorical and improperly deferential to the legislature. If originalism deems that Second Amendment rights are not subject to any level of scrutiny, then this outcome is nuts.

Thomas J delivered the opinion of the Court. Alito J filed a concurring opinion; he joined Thomas J’s opinion in full and expressly rejected means-end scrutiny. Kavanaugh J filed a concurring opinion in which Roberts CJ joined; he accepted that the Second Amendment did not prevent longstanding prohibitions on the possession of firearms, but he put this conclusion in historical terms entirely consistently with Thomas J’s approach (and said nothing at all about scrutiny – means-end, intermediate, strict, or otherwise). Barrett J also filed a concurring opinion; she also joined Thomas J’s opinion in full; and she added some comments about originalist analysis; but she said nothing about restrictions or scrutiny. There are many nuances between these opinions on a wide range of issues, and it will be for future courts to navigate between them. For my purposes, I want to focus on the nutty rejection of scrutiny; and it seems to me that it would be a fool’s errand to seek to undercut Thomas J’s approach to restrictions and rejection of scrutiny by looking for some mitigations in the concurrences. There are none. It is a central feature of the Court’s opinion; and it was one of the main targets of the dissent by Breyer J (joined by Sotomayor and Kagan JJ).

The majority’s rejection of a scrutiny leg in constitutional rights analysis is distinctly nutty. Before this, I had thought it a universal truth that where there is a restriction on a right, the state could seek to justify this on the basis of a good reason that satisfied an appropriate standard of review or scrutiny. For example, where there is a restriction of the right to freedom of expression in Article 10(1) of the European Convention on Human Rights, a State can seek to justify it on the basis that it meets one of the legitimate ends specified in Article 10(2) and is necessary (proportionate) to that end. Similarly, where there is a restriction of the right to free speech in the First Amendment to the US constitution, the government can seek to justify it on the basis that it meets a sufficiently serious state interest and is appropriately tailored to that interest – in this latter context, there are many possible levels of scrutiny, depending on matters such as the nature and gravity of the restriction and the strength of the relevant state interest. To take only one example, in RAV v City of St Paul 505 US 377 (1992), the opinion of Scalia J for the Court (in which Thomas J joined without adding a concurrence) is a masterpiece of First Amendment analysis that demonstrates when various levels of scrutiny are required. Indeed, in Reed v Town of Gilbert 576 US 155 (2015) Thomas J for the Court held that content-based restrictions did not survive strict scrutiny, in the process providing a thorough analysis of when the First Amendment requires strict scrutiny.

However, Thomas J’s commitment to strong First Amendment protections or to tiers of scrutiny is not consistent. He is critical of the strong First Amendment protections afforded by the Court to libel defendants in New York Times Co v Sullivan 376 US 254 (1964) (see his opinions in McKee v Cosby 586 US — (2019) (pdf) (concurring in denial of certiorari) and Berisha v Lawson 594 US — (2021) (pdf) (dissenting from denial of certiorari); update (27 June 2022) see also Coral Ridge Ministries Media, Inc v Southern Poverty Law Center 597 US — (2022) (pdf) (dissenting from denial of certiorari) end update). And, in his dissent in Whole Woman’s Health v Hellerstedt 579 US 582 (2016), he criticised the Court’s habits of applying different rules to different constitutional rights, and of invoking one standard of scrutiny whilst actually applying another one; and he called the whole approach to tiers of scrutiny into question: in his view, a “law either infringes a constitutional right, or not; there is no room for the judiciary to invent tolerable degrees of encroachment”. Bruen shows clearly where such thoughts lead; rather than pruning the numerous tiers of scrutiny and applying them consistently, it seems that Thomas J would abolish them completely.

That would be a nutty conclusion, and nowhere more so than in the First Amendment context, where it would undo more than a century of jurisprudence. However, if – per impossibile – tiers of scrutiny are rejected in that context, then at least three conclusions may follow. First, the textual argument that the First Amendment is an absolute would re-emerge. Second, the scope of its protections for “freedom of speech, or of the press” would likely radically contract to those forms of speech and press expression common at the time of the adoption of the amendment and to those modern forms expression sufficiently analogically similar to historical examples – this would probably accord constitutional protection only to a sub-set of political speech. And, third, the only restrictions on this absolute but narrow right to political speech would be those which, in Bruen‘s terms, are consistent with the First Amendment’s text and historical understanding. Indeed, Thomas J hinted as much in Bruen, by invoking history in the First Amendment context, and asserting that his approach to the Second Amendment accords with the Court’s approach to other constitutional rights, such as the freedom of speech in the First Amendment (slip op, at 15). In seeking to defend a scrutiny leg in Second Amendment analysis, Breyer J’s dissent expressly rejected Thomas J’s analogy with the First Amendment (slip op, at 24-25; update (27 June 2022) see also Michael C Dorf “The Peculiar Historical Methodology of the SCOTUS Handgun Carry Case” (Verdict; 23 June 2022) end update)). But it may not be enough to prevent the analogy going the other way in a future case; if so, then the argument would go like this: if restrictions on the Second Amendment must be justified by the historical tradition of firearms regulation, and not by any means-end test such as strict or intermediate scrutiny, then restrictions on the First Amendment must likewise be justified by the historical tradition of speech regulation, and not by any means-end test such as strict or intermediate scrutiny. This would entirely upend the Court’s First Amendment jurisprudence. But that outcome is less unthinkable today than it was last Thursday. Let’s hope it does not come to this.

1A, US Supreme Court