I can’t let this pass. From a post by Nate Oman on Concurring Opinions:

Apparently Ben Davis of the University of Toledo law school really gets into the facts of Hadley v. Baxendale, acting out the various parts for his students. (Who, of course, have taped his performance and posted it to Google Videos.) For the non-contracts geeks in the audience, Hadley is a famous case on the recoverability of consequential damages for breach of contract. The facts had to do with late delivery of a replacement mill shaft, and the mill owner’s claim for lost profits. Here is professor Davis, complete with mill shaft…

I am still trying to decide if this is a case of creative pedagogy, or a cautionary tale about students, cameras, and Google…

Hadley v Baxendale [1854] EWHC Exch J70, (1854) 9 Exch 341, 156 ER 145 (23 February 1854) has its own wikipedia entry, which points to this picture of the mill as it is now, and to this historical background to the case; and here’s a contemporary advertisment for Pickfords, the carriers who lost the shaft (more on them in this context here and here – indeed, they’re still around). Here’s a short bio of Baron Alderson, the judge who decided the case and wrote the famous judgment. It is an important case, which has drawn analysis from each major field of legal scholarship (eg Adler, Bebchuck & Shavell, Geis, and Posner; all from SSRN; also Danzig 4 (2) J Leg Stud 249 (1975); Eisenberg 80 (3) Calif L Rev 563 (1992); and Landa 16 (2) J Leg Stud 455 (1987)), and formed the basis of the relatively recent decision of the House of Lords in Jackson v Royal Bank of Scotland [2005] UKHL 3 (27 January 2005) which I am sure will feature strongly at Ralph Cunnington‘s forthcoming conference on Contract Damages at the end of next month in the University of Birmingham.

Not sure I could carry off the one act play, though.

Bonus. Movers are movers, whenever they move things: 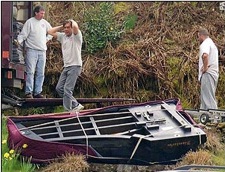 Brian Haigh was back at work yesterday, once again bringing all of his 25 years of experience to bear on the job of moving pianos. But, after a sorry incident at the weekend, he was the first to admit that his pride had been badly dented by the moment when he and two colleagues managed to drop a Â£26,000 Bosendorfer grand piano which the organisers of a festival had spent two years saving up to buy. (Read more, Daily Telegraph, 12/04/2007).

Update (15 June 2007): Jeremy Telman‘s “Limerick of the Week” this week on ContractsProf Blog:

Foresee that things can end badly
And keep that in mind, or else sadly,
A life of regret
Is all you will get
If your harm’s consequential — poor Hadley!