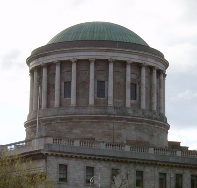 … the Courts Service in a background note provided to The Irish Times … pointed out that the changes in Irish society in recent decades, along with the growing volume of law from a variety of sources (for example, the EU, international agreements, the European Convention on Human Rights), [meant that] the volume, diversity and complexity of cases had increased exponentially. Yet the structure of the courts has remained the same since 1937, and, while the other court jurisdictions have grown in size, the Supreme Court has only grown minimally

In 2006 the Government set up the Denham committee which The Irish Times understands recommended a referendum to clear the way for a Court of Civil Appeal as the Constitution does not provide for one. The Government may not wish to go there, but at the least there is a compelling case for more Supreme Court judges and senior legal assistants to do some of the time-consuming work and free up judges to concentrate on essential work. …

This is a very important development, and I look forward with great interest to the formal publication of the report. In my earlier post, I wondered about several constitutional issues. First, Article 34.2 of the Constitution provides that “The Courts shall comprise Courts of First Instance and a Court of Final Appeal”. If “comprise” means “consists of” or “be made up of”, then this would mean that the only main courts can be the High Court and the Supreme Court, and there would be no constitutional space for a Court of Appeal. Second, the power to rule on issues relating to the constitutional validity of statutes is reserved at present only to the High Court and Supreme Court under Art 34.4.2, and, if the Court of Appeal is not to be hobbled, it too should enjoy that power. Third, in principle, judges of the Court of Appeal should have the same constitutional level of independence and security of tenure as High Court and Supreme Court judges currently enjoy under Art 35.4.1. Fourth, the President of the High Court ranks second in the judicial hierarchy after the Chief Justice of the Supreme Court, and interposing a Court of Appeal between those two courts would have implications for that hierachy. Moreover, there may be practical questions of numbers of judges, the divisions and panels in which to sit, and retirement ages, as well as potential problems of where to site it. In the UK, the plan to transform the House of Lords into a Supreme Court has been beset by the practical problems of finding and developing an appropriate prestige site. But the practical issues are not insurmoutable. The same might not be said for the constitutional issues, and it will be very interesting to see what the Denham committee has to say about them.

5 Reply to “Plans for an Irish Court of Appeal?”