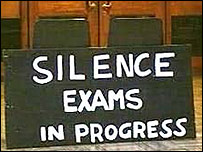 Marking exams, grading papers, and evaluating assessments are the bane of academics’ lives (even worse, in my view, than the ever multiplying waves of administrative paperwork that seem to be taking over the university). During the early summer annual exam marking season, Mary Beard and Ferdinand von Prondzynski had some interesting observations about the process; now, just in time for the late summer repeat exam marking season, Peter Black enters the fray; and all of their observations remind me of the classic guide to grading exams which I commend to all hard-pressed examiners out there.

Second, a blogpost by Ferdinand von Prondzynski on anonymous marking spurred a fierce debate in the comments about the merits of anonymity. It’s been TCD policy since 1998, so I was surprised to learn from Ferdinand’s post that the matter is still live in the UK. The additional administrative burden is a price worth paying for a system where marks are not only fairly awarded but are seen to have been fairly awarded.

And third, in Have you finished your marking?, Peter Back refers to an article in a recent edition of an Australian newspaper covering higher education issues; the article begins with an anecdote in which the author was conducting interviews for a lectureship in which a candidate memorably confessed:

Well, that candidate can come grade my students’ assignments any day. To help in that difficult process, the rest of the newspaper article has some interesting advice; I’ll let Peter take up the story:

In Campus Review, for the week commencing Monday, 3 August 2009, there is a biting and hysterical piece that looks at the pressures academics face when marking.  If you are a university lecturer (or even a student) you really should read the whole piece here, but I thought I'd reproduce below the part of the piece where the author offers some suggestions for those about to start marking assignments:

Penultimately, if you’ve made it this far, let me recommend once again that you treat yourself to the classic guide to grading exams.

Finally, for the terrible post title, my further apologies to Juvenal.

Read all these posts carefully; there will be a quiz in class worth 10% of your final mark in this subject.

3 Reply to “Who will examine the examiners?”