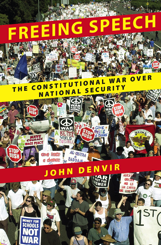 An extraordinarily important book is published today. It is Freeing Speech: the Constitutional War Over National Security (NYU Press | Amazon | Google Books) by John Denvir, Research Professor of Constitutional Policy at the University of San Francisco School of Law.

The United States is in the midst of a heated conversation over how the Constitution impacts national security. In a traditional reading of the document, America uses military force only after a full and informed national debate. However, modern presidents have had unparalleled access to the media as well as control over the information most relevant to these debates, which jeopardizes the abilities of a democracy’s citizens to fully participate in the discussion. In Freeing Speech, John Denvir targets this issue of presidential dominance and proposes an ambitious solution: a First Amendment that makes sure the voices of opposition are heard.

Denvir argues that the First Amendment’s goal is to protect the entire structure of democratic debate, even including activities ancillary to the dissemination of speech itself. Assessing the right of political association, the use of public streets and parks for political demonstrations, the press’ ability to comment on public issues, and presidential speech on national security, Denvir examines why this democratic model of free speech is essential at all times, but especially during the War on Terror.

Courts’ interpretations of constitutions profoundly affect how we live. Many courts of final appeal accord very great deference to governments in the area of national security. In an era of political spin, not to say outright government manipulation of the media, government is often protected from criticism by government secrecy. Freeing Speech argues that we need a new reading of the constitution that both limits executive power and supports full, democratic debate. It is a message that is as important in the US (which is the focus of the book) as it is in Ireland, where the leading Supreme Court decision in this area is the deeply flawed The State (Lynch) v Cooney [1982] IR 337 upholding the infamous section 31(1) of the Broadcasting (Authority) Act, 1960 [(also here), as amended by section 16 of the Broadcasting Authority (Amendment) Act, 1976 (also here), ultimately repealed in 2001].

Mark Tushnet, William Nelson Cromwell Professor of Law, Harvard Law School, is entirely right when he says of the book that it offers “provocative suggestions for a First Amendment for our time, one that would provide us today with the information we need to govern ourselves”. Those interested in the issue should immediately purchase a copy of this book. Indeed, buy two (you can make a gift of the other to your friendly neighbo(u)rhood enthusiast for unfettered state power). Order them from Amazon, and while you’re at it, authorise Amazon to notify NYU Press to make the book available on Kindle.

5 Reply to “Denvir on Freeing Speech: the Constitutional War Over National Security”