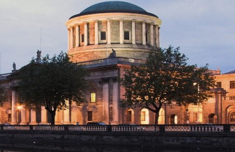 In the internet era, most Supreme Courts worth their salt have attracted high quality dedicated and independent commentary from the blawgosphere. The market leader is probably SCOTUSblog – which, as its name suggests, is a blog about the Supreme Court of the United States – but I also like the charm of Court Artist as well. The Supreme Court of Canada has The Court; the Court of Justice of the European Union has ECJblog; the European Court of Human Rights has Strasbourg Observers; and, right from the off, the UK’s new(ish) Supreme Court has had UKSC blog. Now, the Irish Supreme Court has taken its place amongst this premier league of courts of final appeal.

Paul MacMahon has just started Ex Tempore. He hopes that Ex Tempore will provide a resource for lawyers, academics, law students, and anyone seeking to understand what the Irish Supreme Court does and how it does it. The site provides weekly previews of upcoming cases, keeps watch on relevant High Court developments, and offers commentary on the Court’s decisions. More broadly, Ex Tempore explores the Court’s history, its place in the Irish system of government, and its relationships with other courts. I’m really excited about this development. It’s been a long time coming, and it joins the growing list of ardent and high-quality Irish law blawgs.

At this early stage, three things occur to me. First, it looks great. It has a very well thought out look and feel; it’s clean, and I think it will scale well as the site grows. I know that if I shouldn’t judge a book by its cover, I shouldn’t judge a blog by its theme, especially if I’m going to read the majority of its content via its associated RSS and Twitter feeds. But the best blogs offer more than just their posts; they add other value to bring readers back to the site; and if I don’t think that I can cope with a badly-designed or cluttered site, I’m not going back. There are lots more blogs out there for me to consider. So, I’m delighted that Paul is offering a lot of additional content in an easy-to-use format; this should serve to grow his stats rapidly.

Second, I love the name. If I’d thought of it when I was starting this blog, I may very well have used it then myself. But I didn’t, and we’re stuck with Cearta. It occurred to Paul, and he explains why he thinks it’s particularly apt as a title for his blog:

“Ex Tempore” is a lawyers’ latin term meaning, roughly, “at the time.” Unusually for a Supreme Court, the Irish Supreme Court resolves a large proportion of its cases ex tempore, by issuing its decision orally at the conclusion of the argument, without issuing a written judgment. The name “Ex Tempore” also captures the strengths and limits of any blog that covers a working Court: the blog posts are timely and off-the-cuff.

Third, his post today belies that last claim of speed and haste: he accurately sums up the effect of the decision in Dellway Investments v NAMA [2011] IESC 4 (03 February 2011) as A Minor Victory for McKillen? He didn’t need the question mark. That’s all it was – minor. The Court did not hold in the appellant’s favour in respect of any of the substantive challenges to the relevant legislation (the National Asset Management Agency Act, 2009; also here). Instead, the Chief Justice pointed to the legally significant fact that certain key decisions could not have been taken by NAMA as that agency did not in fact exist at the time the decisions were made – this meant that the decisions were void, and of no legal effect. As Murray CJ put it:

The Court is satisfied, therefore, that the December decision made by the interim team had no legal effect and, that contrary to what was decided by the High Court, it was not given legal effect by any subsequent act or series of acts of NAMA. This is no mere matter of form. It is fundamental to the functioning of a statutory body that it, itself, take such decisions as it is empowered to make by the statute and exercise any discretions conferred on it. Consequently, NAMA has made no decision to acquire the appellants’ loans. The appellants are, therefore, entitled to a declaration to that effect.

However, this does not affect the validity of the Act under the Constitution or EU law, so it will have little or no effect on the work of the agency or on other transactions which the agency has carried out. Of course, there was some rather excitable chatter when the decision came down, but that was mostly speculative. Paul’s blogpost title simply cut through all that and made the necessary point that the appellant’s victor was, in the big scheme of things, a minor one.

Commentators are increasingly seek to exercise the next word after a court of final appeal has decided an issue. Ex tempore has made an auspicious start; I look forward to what Paul has to say as the Supreme Court goes about its work.

One Reply to “Ex tempore: the next word after final appeal”