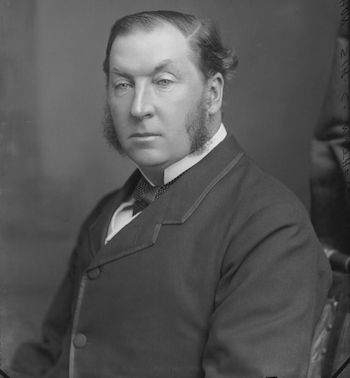 Thus (probably) spoke a nineteenth century Irish judge, Sir James Mathew (1830-1908) (pictured left). The Ritz is now owned by David and Frederick Barclay, and they are at present locked in what the media are describing as “bitter” legal proceedings (in tabloid-speak, is there any other kind of legal dispute?) being taken against them in London by Irish businessman and property developer Paddy McKillen. McKillen and the Barclays own stakes in a high profile hotel group; and in these proceedings, McKillen alleges that the Barclays have been attempting to seize control of the group by unlawful means. He is no stranger to high-stakes litigation, having successfully thwarted the National Asset Management Agency in the Irish courts in Dellway Investments v NAMA [2011] IESC 4 (3 February 2011).

In the London proceedings, much dirty linen had already been laundered in public, and McKillen balked at the prospect of having to wash more, seeking an order of the court to keep sensitive information about his personal business financial affairs away from the prying eyes, not only of the media and the public, but also of the defendants! Unsurprisingly, the application failed (Irish Independent | Irish Times here and here | PA | RTÉ News). In a judgment delivered last week, Richards J held that the basic principle of open justice required the whole of the trial to be heard in public, and that the Mr McKillen’s evidence came nowhere near to overcoming that basic principle.

The case is McKillen v Misland (Cyprus) Investments Limited [2012] EWHC 1158 (Ch) (26 April 2012)(pdf) [I am grateful to Mark Hennessy for providing me with a copy of the approved judgment; it should appear on BAILII – probably at this link – in due course; update: it is now at that link], and it is a very important reaffirmation of the principle of open justice. Richards J had imposed a confidentiality regime for the purposes of pre-trial steps, and the applicant effectively sought to continue that regime in respect of his personal finances. It would have meant that documents and evidence given in relation to the relevant issues would not have been available to the defendants but only to their solicitors and counsel, and that part of the trial dealing with those issues would have been held in private. Richards J held that this would therefore have involved a significant departures from two fundamental common law principles: first, the principle of open justice requires that trials are conducted in public; and, second, the principle of natural justice includes the right of a party to know the case against him and the evidence on which it is based (relying on Al Rawi v The Security Service [2011] UKSC 34 (13 July 2011) [10]-[13] (Lord Dyson); and later, in respect of open justice, to Scott v Scott [1913] AC 417, [1913] UKHL 2 (5 May 1913); R v Sussex Justices, ex p McCarthy [1924] 1 KB 256; Attorney General v Leveller Magazine [1979] AC 440; R (Mohamed) v Secretary of State for Foreign and Commonwealth Affairs (No 2) [2011] QB 218; [2010] EWCA Civ 65 (10 February 2010); R (on the application of Guardian News and Media Ltd) v City of Westminster Magistrates’ Court [2012] EWCA Civ 420 (03 April 2012), blogged here).

Richards J emphasised that the open justice principle is not a mere procedure rule, but a fundamental common law principle; any departure from the principle is permitted only if it is necessary in the interests of justice; and the the party seeking to establish that necessity must do so by clear and cogent evidence which will be subjected to careful scrutiny by the court. Furthermore, he reiterated that sitting in private is the last resort, and that, where the court is satisfied that some inroad into the principle of open justice is required, it will strive to keep it to the minimum and will sit in private only if any other course is effectively unworkable (see Ambrosiadou v Coward [2011] EWCA Civ 409 (12 April 2011); JIH v News Group Newspapers [2011] EWCA Civ 42 (31 January 2011)). He concluded that the balance came down clearly in favour of the whole trial being conducted in public, as the nature of the evidence which the applicant sought to be heard in private, came nowhere near overcoming the basic requirements for open justice.

This common law approach is very similar to that being taken in other jurisdictions where the principle of open justice has constitutional foundations. For example, in Canada, Reuben Zaramian on TheCourt.ca explains that the Supreme Court:

(a) such an order is necessary in order to prevent a serious risk to the proper administration of justice because reasonably alternative measures will not prevent the risk; and

As a consequence, just as Richards J did in McKillen, the Canadian courts have emphasised the need for a solid evidentiary basis to support any sealing order or publication ban. Irish Courts are heading in the Dagenais/Mentuck direction: any publication ban, as a restriction upon the constitutional principle of open justice, must be necessary and proper to do justice as between the parties, and there is a heavy onus of proof to establish such necessity. As I have argued in an earlier post, a constitutional basis for the open justice principle is potentially sounder than a common law basis, because the latter must cede to the plain words of a statute, whereas the former can provide either a greater constraint upon the interpretation of the statute or even a basis for striking it down. In McKillen, the applicant took his proceedings pursuant to the “unfair prejudice” provisions of section 994 of the Companies Act 2006 (the successor to the “oppression” provisions in section 210 of the Companies Act, 1948, on which the “oppression” provisions of section 205 of Ireland’s Companies Act, 1963 (also here) and of Head 72 of the Company Law Review Group‘s General Scheme of a Companies Bill are based). Section 205(7) of the Companies Act, 1963 provides

If, in the opinion of the court, the hearing of proceedings under this section would involve the disclosure of information the publication of which would be seriously prejudicial to the legitimate interests of the company, the court may order that the hearing of the proceedings or any part thereof shall be in camera.

Because the open justice principle has a constitutional basis in Ireland, the Supreme Court has emphasised that this provision has to be given a very narrow compass (In re R [1989] IR 126, [1989] ILRM 757 (doc| (pdf); Irish Press v Ingersoll [1994] 1 IR 176, [1993] ILRM 747). In those cases, as with Richards J in McKillen and the Supreme Court of Canada in Dagenais and Mentuck, the Irish Supreme Court emphasised that any restriction upon the constitutional principle of open justice, must be necessary and proper to do justice as between the parties, and that there is a heavy onus of proof to establish such necessity.

Since the application to have part of the case heard in private failed, the case has continued in public. As the owners of the Ritz Hotel have demonstrated, as the defendants in a dispute over the ownership of some of London’s other luxury hotels, in England, justice is indeed open to all.

10 Reply to “In England, justice is open to all – like the Ritz Hotel”