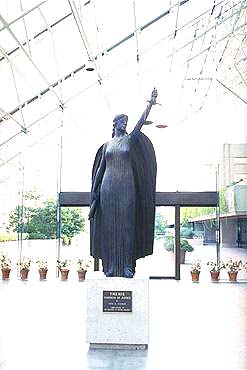 The statute in the picture on the left is in the Vancouver Courthouse of the Supreme Court of British Columbia, Canada. The ancient Greek Titaness Themis, is the embodiment of divine law, order, and custom. A daughter of Uranus, and an early bride of Zeus, she issued her divine edicts to mankind through the great oracle of Delphi. Her later Roman equivalent was Justitia, and artistic representations of justice (blind and impartial – including those shown on this blog) are now typically Roman rather than Greek. However, the statute in the Great Hall of the Law Courts Building in Vancouver (pictured above), is a bronze by Jack Harman and it is explicitly of Themis.

I have written on a number of occasions on this blog about the importance of open justice to the rule of law, and I noticed the following report in Saturday’s Irish Times:

Property developer Paddy McKillen’s bid to keep information about his financial dealings out of the public arena during a High Court case in London is to be challenged by a number of newspapers, including The Irish Times.

… Mr McKillen is suing David and Frederick Barclay in a dispute over three London hotels … [and he] is attempting to stop publication of further details of his financial position, which his legal team says will allow the Barclay twins to destabilise the developer in relation to other assets. …

Besides a ban on the press hearing some of the case, [McKillen] also wants disclosure of some of his affairs permanently kept from the Barclays and Mr Quinlan, though available to their legal teams. The application was opposed by The Irish Times, Independent News and Media, the Guardian, the Financial Times and the London Times Newspapers.

That latter article contains a good summary of the arguments addressed by all sides to Richards J, and that summary reinforces my view that the claim would almost certainly fail as a matter of Irish law (In re R [1989] IR 126, [1989] ILRM 757 (doc| (pdf); Irish Press v Ingersoll [1994] 1 IR 176, [1993] ILRM 747). For what it’s worth, as I understand the case, McKillen has brought a claim against the Barclays; and since he is seeking the advantages of a court action, he should accept the disadvantages too – if, from his perspective, the principle of open justice is a business disadvantage, that is the price he must be prepared to pay for seeking the benefit of the courts in the first place. It will therefore be interesting to see how this fares in the English courts after R (on the application of Guardian News and Media Ltd) v City of Westminster Magistrates’ Court [2012] EWCA Civ 420 (03 April 2012) (which I blogged here).