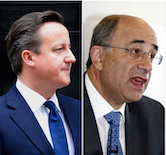 In essence, Leveson recommends that the press ought to be overseen by an independent self-regulatory body, with statutory underpinning, and governed by an independent Board. In so doing, he is adopting the basic structure of the Press Council of Ireland and the Office of the Press Ombudsman which were established by the media industry in Ireland and given statutory recognition pursuant to section 44 of, and Schedule 2 to, the Defamation Act, 2009 (also here), and described in great detail by John Horgan, the Press Ombudsman, to the Inquiry. Unfortunately, Cameron misdescribed the Irish system in the House of Commons last week (see Hansard 29 Nov 2012 Columns 446-482).

He said, several times, that “no matter how simple the intention of the new law, the legislation required to underpin the regulatory body would be more complicated”. If the Irish system is taken as a model, then this is simply not true. The Irish legislative provisions run to one section of the Defamation Act, 2009, and a Schedule to that Act that is less than two pages long. A law that provides for statutory underpinning that describes what the regulatory authority does, what powers it has, and how it is made up, does not have to be “quite a big piece of law” – it can be done, and has successfully been done, in less than three pages. He sought to reinforce his point with a piece of political theatrical bravado:

I have got the Irish Defamation Act of 2009 in front of me. It runs to many, many pages, setting out many, many powers of the Irish Press Council. It is worth Members of the House studying the Irish situation and asking whether we want to have legislation of that extent on our statute book—which of course could then be amended at any moment, by any politician at any future point. That is an important consideration. …

The point I am making is that putting in place underpinning may well turn out to be not as simple as having a one or two-clause Bill. We would have to start defining what the body is, what the body does, what powers it has and what the extent of it is, rather as there is in the Irish system. Once we have done that, we would be in danger of finding that we have put in place a statutory Act on the press that is then very, very easy to amend. My point is that this House of Commons should pause, stop and think before taking a step of that magnitude. …

Of course the Defamation Act, 2009 runs to “many, many pages” – it is, after all, an Act of 44 sections and 2 Schedules. However, it is not confined to providing a mechanism of statutory recognition of the Press Council; rather, is a restatement of the entire law of defamation in Ireland; and given that scope, it is in fact a model of economy of language. More to the point, the provisions relating to the Press Council and Press Ombudsman run to less than three pages. Hence, if the Commons does take up Cameron’s challenge of “studying the Irish situation and asking whether we want to have legislation of that extent on [the UK’s] statute book”, then a study of the Irish position demonstrates the Leveson recommendations can be implemented not with complexity but with brevity.

If the current UK deliberations can learn from the Irish experience, it may be that the Irish model may also have something to learn from the Leveson recommendations. I will take four examples. First, Leveson recommends that the regulator should consider whether it might provide an advisory service to editors in relation to consideration of the public interest in taking particular actions, and that it should be able to examine issues on its own initiative and undertake its own investigations of serious or systemic failures. At present, the Press Council of Ireland exercises neither function; but both seem to me to be entirely sensible; and I see nothing in the Act to prevent it from doing so.

Second, in the 2009 Act, the legislative carrot for membership of the Press Council is that it counts in a newspaper’s favour in the application of the defence of fair and reasonable publication on a matter of public interest (see section 26(2)(f)-(g); also here). Leveson has proposed an even more attractive carrot:

67. … If, by declining to be a part of a regulatory system, a publisher has deprived a claimant of access to a quick, fair, low cost arbitration of the type I have proposed, the Civil Procedure Rules (governing civil litigation) could permit the court to deprive that publisher of its costs of litigation in privacy, defamation and other media cases, even if it had been successful.21 After all, its success could have been achieved far more cheaply for everyone.

This kind of costs penalty would probably require an amendment to the 2009 Act to provide the legislative foundation for a similar amendment to the applicable Rules of Court, but it is an inspired idea, and one that the Irish system could, with profit, adopt.

Third, there is a real sense in the Report that the regulator must have teeth if it is to be taken seriously. Hence, Leveson recommends that the regulator have the power to impose fines, of up to 1% of turnover with a maximum of £1m, for serious or systemic breaches. The Report of the Legal Advisory Group on Defamation (2003) (pdf), which led to the enactment of the 2009 Act, did not recommend that the Council should have the power to impose fines. However, it did recommend that, where a publication refuses to comply with a decision of the Council, it could apply the Circuit Court for an order compelling the publication to so comply; and if the publication continued to refuse to comply, then the Court could impose a fine which would be paid to the Council (p117). This was part of a more elaborate proposed statutory structure than was eventually enacted in 2009, so this power is not currently part of the Press Council’s arsenal, but the Leveson recommendations might provide a context in which to revisit the issue.

Fourth, running through the Report is a deep distrust of editors as regulators: in Leveson’s view, any model with editors on the main Board is simply not independent of the industry to anything approaching the degree required to warrant public confidence. As he said in his statement (pdf) on the publication of the Report, “it is still the industry marking its own homework”. Hence, he recommends that there should be no serving editors on the Board of the regulator. The 2009 Act is silent on this point; it simply refers to “directors who represent the interests of owners and publishers of periodicals” (section 5(1)(b); Schedule 2) but it does not say anything as to whether these directors may or may not be serving editors, and two of the current industry members actually are. On the one hand, that has not called the actual operation of the Press Council into question. On the other, Leveson’s point relates not to the actual operation of a regulator but to the legitimate public perceptions about its membership. It would not require any amendment to the Act for the Press Council to decide that, in future, it would not have any serving editors amongst its members.

There is much that the UK can learn from the Press Council of Ireland, and there is much that the Council can learn from the Leveson recommendations. But neither is likely to happen if the Irish system or the Leveson recommendations continue to be misrepresented. Go ahead; read the Report and the Act – you will be pleasantly surprised by what you find.

One Reply to “#Cameron to #Leveson: LOL”