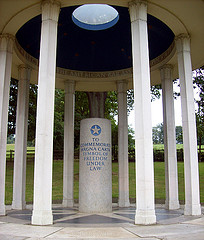 I recently blogged here about the speech Lord Neuberger, President of the UK Supreme Court, delivered to the DU Law Society on Friday, 6 March 2015. The full text of his speech is now available here (pdf) so you can judge for yourself how accurate my notes are.

Two forthcoming events relating to Magna Carta are of Irish relevance. First, my TCD colleague Peter Crooks will deliver a paper on “Magna Carta in Ireland” to the Magna Carta Conference, which will be held in King’s College London and the British Library, from 17-19 June 2015. Second, an exhibition on Magna Carta is coming soon to Christ Church cathedral, Dublin. I am sure I will return to both of these events on the blog in due course. Meanwhile, I notice that Lord Neuberger has returned to the topic, in a speech entitled “Magna Carta and the Holy Grail”, which he delivered in Lincoln’s Inn, London, on 12 May 2015. It is available here (pdf); a flavour (with added links):

16. … One school sees what happened at Runnymede [where Magna Carta was signed and sealed by King John on 12 June 1215] as little more than a dramatic moment of history which has captured the public imagination [see, for example, the memorial at Runnymede, pictured above left], and which only has symbolic importance due to the subsequent accidents of history. This view was characterised as “the historian’s view” by my colleague Jonathan Sumption [here (pdf), where he described the current brouhaha about the Magna Carta as “high-minded tosh”] … The other … more romantic view … was encapsulated by Igor Judge in a stirring speech, in Middle Temple, when he called it “the banner, the symbol, of our liberties” [text; video]. …

23. The different perceptions of Magna Carta over time and the different perceptions of modern writers and speech-givers, whether historians, lawyers or conspiracy theorists, serve to reflect the Humpty Dumpty view of life: Magna Carta means what just what I choose it to mean; this is both the beauty and the danger of historical “facts” which become part of spurious national myth. …

41. & 42. … the film Monty Python and the Holy Grail [imdb | wikipedia] … led to the title of this evening’s talk. I was rather pleased with the title … However, I was somewhat taken aback when my judicial assistant, Hugh Cumber told me that Magna Carta Holy Grail [discogs] is the title of an album by the rapper Jay Z. …

43. … The music critics can’t agree about Jay Z’s album, the historians and the lawyers can’t agree about Magna Carta, the romance poets can’t agree about the Grail. We are in a world where, in so many cases, perceptions differ and there is no provably right answer. After a century that has given us Einstein’s theory of relativity, Heisenberg’s uncertainty principle, Schrödinger’s cat, and Gödel’s incompleteness theorems, this should come as no surprise.

The 800th anniversary of Magna Carta is the occasion for a wonderful exhibition at the Exhibition in the British Library, where a 13-metre-long embroidery of Magna Carta’s Wikipedia article, a work of art by Cornelia Parker called Magna Carta (An Embroidery) (a detail from which is pictured right) goes on display from today. Every primary school in Britain is to receive a souvenir copy of Magna Carta. And there’s even a Coursera Mooc, to begin on the date when, 800 years ago, Magna Carta was first signed and sealed. No doubt school pupils, mooc students, historians, lawyers, and Magna Carta enthusiasts alike will greatly profit from the resources provided by Magna Carta Project and the Magna Carta 800th site (I particularly love the cover of the Ladybird book King John and Magna Carta).

Given the marked change of perceptions of Magna Carta over the centuries, it is hardly surprising that there are layers of myths, uncertainties, surprises lesser-known facts, and decidedly odd moments associated with. It has been presented as the original social contract. Americans love it. It has even recently been explained for an Irish audience in the Irish Examiner. Indeed, in The Great Charter, Canadian historian Christopher Moore explains why “a thirteenth-century piece of parchment endorsed by an English king who was under threat of death has meaning for Canadians today”. I will give the last word, for now, to Jill Lepore in the New Yorker, 20 April 2015:

The Rule of History

Magna Carta, the Bill of Rights, and the hold of time.

The rule of history is as old as the rule of law. Magna Carta has been sealed and nullified, revised and flouted, elevated and venerated. The past has a hold: writing is the casting of a line over the edge of time. But there are no certainties in history. There are only struggles for justice, and wars interrupted by peace.