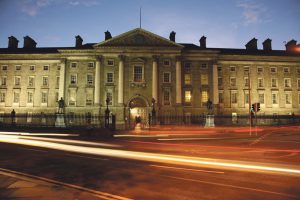 Two questions will have to be answered. The first is: who pays? The second is: how much? As to who pays, as the autumn wears on, we will hear arguments about the merits of state funding against upfront student fees and against deferred payment of student fees. And the more students are required to pay up front, the more likely it is that there will be student unrest, joining the protests the government is already facing from Dublin Bus workers, secondary school teachers and water charge opponents. In this way, students have the capacity to make life difficult for the government.

As to how much is to be paid, if the level of fees is not changed, then it will not matter from the perspective of the universities whether payment comes from students, their banks or the government. What the universities really want is the ability to set their own fees.

In the mouths of politicians, reform is often a synonym for control. When they speak of reforming a sector, they mean placing it under greater political control

When the British government introduced a system of fees paid by students in England and Wales, they softened the blow by introducing a cap on the amount of fees universities could charge. This was partly for political reasons to prevent the top universities charging US-style fees and partly for policy reasons to encourage universities to compete against each other by charging lower fees. These hopes proved in vain. Pretty soon, the cap became a target with more than half of universities in England and Wales now charging the maximum, and the number doing so increases every year.

From the perspective of Irish universities, this would be worst of all possible worlds. There would be student unrest at having to pay high fees, but the fees being charged would be capped by the government and would not reflect the costs associated with courses or the funding needs of the individual institutions.

The Minister for Education and Skills, Richard Bruton, accepts the need for investment in the long-term funding of our higher education system, but he has recently suggested that such investment hinges on reform of the sector. However, he has no sense of what such reforms might be, and he provides no real argument as to why they may even be necessary. The reference to reform is simply the unthinking application of a tired political dogma. Rather than correcting the mistakes of the past, it will compound them.

For, in the mouths of politicians, reform is often a synonym for control. When they speak of reforming a sector, they mean placing it under greater political control. Greater control of the third-level sector has long been on the political agenda. In this way, the government has the capacity to make life difficult for the universities.

The legislative programme published by the government after the election envisages legislation to modernise the governance structures of the universities and to ensure compliance with government guidelines on remuneration, allowances, pensions and staffing numbers. Any such legislation should properly balance three principles.

The first is Oireachtas oversight over universities’s accounts (by means of the Office of the Comptroller and Auditor General and the Public Accounts Committee). The second is Oireachtas control over funding provided by the Oireachtas to the universities. The third is the principle of institutional autonomy, which ensures that universities can independently regulate their affairs, and it is, at present, secured by legislation.

The first two principles, Oireachtas oversight and Oireachtas control, are related but separate. As the recent clash between NAMA and the Comptroller and Auditor General demonstrates, public oversight of the accounts of public bodies is good practice, whatever the source of those bodies’ funding. And control by the Oireachtas, of funding provided by the Oireachtas, is good practice, whatever oversight arrangements are in place. These distinctions are important when it is realised that many public bodies receive funding from sources other than the Oireachtas. Whilst oversight by Oireachtas of the raising and expenditure of such funding is entirely appropriate, there is far less justification for control by the Oireachtas over the raising and expenditure of funding received from sources other than the Oireachtas. The case for such control has to be established, not merely asserted. And the case for such control is not established merely by virtue of oversight.

Given the ongoing financial crisis, Irish universities have increasingly been successful in raising funding from sources other than the government, such as EU research funding, and philanthropy. In Trinity, these other sources now account for about half of our income, and that proportion is increasing every year. However, even as the amount of public funding decreases, government preoccupation with political control increases. Of course, it is important for the universities to render unto Caesar that which is Caesar’s by accepting the principle of Oireachtas control over Oireachtas money. But it is equally important for the government to accept the principle of institutional autonomy by refraining from asserting control over money from other sources. If it does not, the government will make life very difficult indeed for the universities.

One Reply to “Even as Public Funding to Universities Decreases, Government Preoccupation with Control Increases”