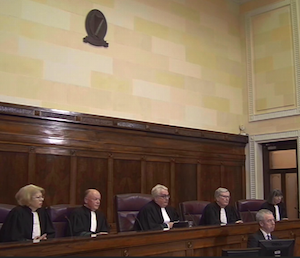 Still from this morning’s broadcast

This is an excellent start, but a lot more needs to be done. As Article 34.1 of the Constitution tells us, justice is administered in public. In this day and age, the broadcast of the Supreme Court’s proceedings should be the norm, and the sooner that is so, the better.