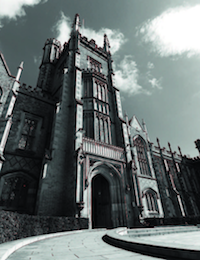 The Lanyon Building, QUB
from the NILQ cover

Attractive packaging is an important element of a product’s effective marketing. Indeed, so central has packaging been to the allure of smoking that Leonard Cohen could extol “the little Parthenon / of an opened pack of cigarettes”. Ireland has been in the vanguard of tobacco control worldwide. With the 2015 and 2017 packaging legislation, it continues to set a very important example. The constitutional validity of these packaging restrictions would underpin a crucial element of the Department of Health’s moves towards tobacco-free Ireland by 2025. And the pack of cigarettes, with large warning photos dominating standardized packaging, would be Cohen’s little Parthenon no longer.

An earlier version of the paper, under the title “Is Standardised Tobacco Packing a Proportionate Restriction on Constitutional Speech Rights”, was delivered at the ICON-S British and Irish Chapter Inaugural Conference, Trinity College Dublin, Ireland, on 5 September 2017.