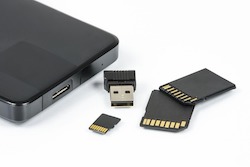 Have you ever transferred music from one device to another? Have you copied music from a CD to your phone to listen to it on the way to work? Have you copied a DVD to a tablet to watch it on a long journey? If so, you have probably infringed copyright, almost certainly without realizing it.

Have you every backed-up the data on your phone, or your laptop? Of course, most of us don’t back-up as often as we should; but, if you do, then you have probably infringed copyright, again almost certainly without realizing it.

Moving data from one format or device to another is known as format-shifting, and both it and backing-up mean that you are making copies of the relevant content or data. Making those copies is an infringement of copyright, unless you have the permission of the copyright owner (which usually you won’t have), or you can rely on a copyright exception provided by copyright legislation (which right now, in Ireland, you can’t).

These exceptions are permitted by the EU’s 2001 Copyright Directive, and they have long formed part of the law in most European countries. Many common law countries have looked at this issue in the recent past, and have concluded that they too should introduce these exceptions. A Bill currently before the Seanad is a golden opportunity for Irish law to do likewise.

Exceptions to copyright are often described as fair dealing, and the Bill ought to be be amended to provide explicitly that format-shifting and backing-up should be regarded as fair dealing too.

However, considerations of fairness require that copyright owners should be compensated for any harm done to them by this fair dealing. In other countries where such exceptions exist, copyright owners receive such fair compensation from levies upon the manufacturers and importers of the blank recording media to which the data is transferred. In this way, a fair balance between the rights of consumers and copyright owners is achieved. Hence, the Bill ought also to be amended to provide such a scheme.

Although the ubiquity of format-shifting and backing-up means that there is widespread infringement of copyright law, copyright owners do not seem to be lining up to drag everyone with music or movies on their phones or tablets or laptops before the High Court. So, it might be asked: what’s the real problem here? There are two.

First, unenforceable or unenforced law is a blot on the statute book. Legislation sends signals; and, without exceptions for format-shifting and backing-up, the signal Irish copyright legislation is sending is that it is not fit for the digital age. This is a pity, especially as the Bill currently before the Seanad contains many reforms to bring Irish copyright law into the twenty-first century. Amending it to include exceptions for format-shifting and backing-up will complete that job.

Second, some people do know that format-shifting and backing-up infringe copyright, and they carry on regardless. The convenience of consuming content across various devices, and the prudence of backing up data, too easily overcome any scruples they might feel about infringing copyright. But this can too easily breed disrespect for the law, and lead to more serious infringements. These consequences are easily avoided by amending the law to ensure that format-shifting and backing-up do not infringe copyright in the first place.

In principle, copying should be lawful where it is for private purposes, and does not damage the underlying aims of copyright law. Prohibiting format-shifting and backing-up frustrates consumers’ reasonable assumptions, and brings the law into disrepute. It is not a tenable state of affairs.

We have been here before. Recording tv programmes on video cassettes for later viewing was widespread before legislation in 2000 ensured that it was not an infringement of copyright. We should do the same thing now, and ensure that format-shifting and backing-up are also not infringements of copyright.

European law permits Ireland to introduce these exceptions. Almost every other country in the EU has done so. Common sense requires us to do so too. The Seanad should take advantage of the opportunity presented by the Bill currently before it, and make Irish copyright law fit for the digital age.

One Reply to “Copyright law must be made fit for the digital age: the Seanad must adopt amendments to the Copyright Bill so that consumers do not unknowingly infringe copyright”