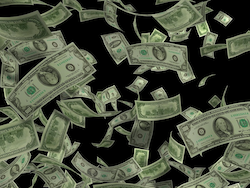 According to Wikipedia, Betteridge’s law of headlines is an adage that states: “Any headline that ends in a question mark can be answered by the word no”. That is true of the question in the title to this post: no, Christmas did not come early for NJ commuters who were showered with money last week. The CBS headline tells the story: Armored truck spills cash on N.J. highway, drivers rush to grab dollars and crashes ensue. Of the more than $500,000 that spilled on to the highway, nearly $300,000 remains missing, and the bank and the police want it back. As with overactive ATMs, these flying dollars are not so many early Christmas presents, the bank is entitled to recover them, and retaining them may very well amount to theft.