Two letters in the Irish Times can speak for themselves.


This is the first:

While Trinity College has always enjoyed imitating the Oxbridge universities, this development should concern all citizens who value equality and indeed equality of access.

Whatever one may say about the CAO system, it is not open to the type of manipulation that I am certain will happen once the ridiculous “personal statement, teacher references, etc” are included in the entry selection process.

Clearly the thin end of the wedge, this development should be seen in the context of the introduction of the HPat exam, namely another attempt by the professional classes to reduce competition for college places for their privately schooled sons and daughters.

As Winston Churchill might have said, the CAO points systems is the worst system for college entrance, except for all the other entry systems that have been tried from time to time. Shameful. – Yours, etc,

This is the second:

Sir, – Further to Cathal O’Sullivan’s recent letter (August 24th), I would like to reassure your readers that my colleagues and I at Trinity Law School are acutely aware of the challenges involved in attempting to formulate an alternative university entry system to the existing CAO route.

Image: In a classroom full of pupils and their lawyers, one child responds to his teacher:

Caption: Miss Finch, my attorney has advised me that I’m not obligated to address the question of what I did on my summer vacation. Nonetheless, I would like to respond.…

… remember that there is one golden rule for success in journalism: libel someone famous early in your career.

… believe nothing until it has been officially denied.

This post is just a quick note to congratulate Jack Beatson (pictured left) on his elevation to the Court of Appeal in London. Before he became a judge, Jack was Rouse Ball Professor of English Law at Cambridge and a Fellow of St John’s College, and in that capacity he supervised my PhD thesis. (Adopting a line I saw elsewhere, we both survived).

I’m delighted to learn today that, in the formal wording of such announcements, the Queen has been pleased to approve the appointment of The Honourable Mr Justice Beatson as a Lord Justice of Appeal to fill a forthcoming vacancy in the Court of Appeal. In Debrett’s, he lists his recreations as “trying to relax”. I fear he might not have much time for that in his new role. 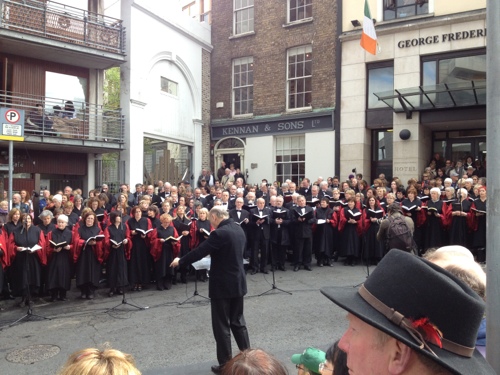 As I explained for this date last year, I spent lunch-time listening to Our Lady’s Choral Society‘s annual performance of highlights from Handel’s Messiah on the site on Fishamble Street, Dublin, on which it had its world première on this day in 1742. The image above is a photo of the performance (click on it for a larger image). Unusually for Dublin, and thankfully, the rain stayed away! Update: here’s a report in the Irish Times and another in the Irish Independent.

And the performance was great, especially the audience-participation “Hallelujah Chorus” encore. I’m looking forward to next year already. …

At the end of each of its chapters, the Copyright Review Committee‘s Consultation Paper poses questions based on the analysis in the relevant chapter on which further responses are sought (update: you can download a pdf of the Paper here (via DJEI) or here (from this site)). The questions are presented here by chapter. If you want the questions based on a particular chapter, click on the “questions” link after the chapter name immediately below. If you want the full list, just keep reading this post. Print is Dead. Long Live the Word. Britannica Stops the Presses. Welcome to the Henry Blake cliche festival. CNN Money reports that after 244 years the print edition of Britannica will no longer be offered. As many may recall, one study indicated the Wikipedia was more accurate than Britannica…

But let’s not obsess over print. … Today the print edition is $1395. … Digital divide and access to knowledge discussions can miss that the cost of the set would cover Internet access for 20 months. … Digital also is a dream for the look it up model. … Will folks pay for the online version at $70 per year? I would guess not.

So go with God, Britannica. Thank you for the years of service and enhancing my childhood. And congratulations on your new form. Like those in Good To Great, you have ditched the old method and seek to play in the new space. It is a bet, but it you are in the correct game and that is good.

via madisonian.net and Concurring Opinions
…